Some features of our website won't work with Internet Explorer. Improve your experience by using a more up-to-date browser like Chrome, Firefox, or Edge.
Skip to content
Back to search results
Previous resultNext result
Order copy

Paradise lost / a poem by John Milton. The text of the first edition prepared for press by J. Isaacs.

Title in red and black.

"A faithful reprint of the first impression of 1667, together with the Argument and Explanation of the Verse added in the later issues ... presents the original structure of the poem in its ten books"--Foreword.

"The Golden Cockerel edition ... has been designed and printed by Christopher and Anthony Sandford, Francis Newbery, and Owen Rutter. Work was begun on the 22nd January, 1935, and finished on ... the 12th May, 1937. All the titling and the type used belong to the Golden Cockerel fount designed for the Press by Eric Gill and cut by Caslon, the Poem being in the 18-point size, and the note on the Verse and the Argument in the 14-point size. All the type has been set by A.H. Gibbs, assisted by H. Batchelor, and the press worked by H. Barker. The lamb-vellums were prepared by Band. The Batchelor paper was hand-made from pure linen rag with an appropriate Tree & Serpent watermark. The engravings are by Mary Groom. The binding is by Zaehnsdorf. The cloth sides were hand-marbled by Sydney Cockerell. The edition is limited to 200 numbered copies: numbers 1-14 printed on the vellum and numbers 5-200 on the paper"--Colophon. 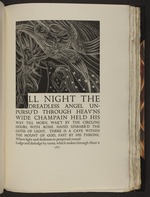