Your sesssion has expired. Please login to continue.

Turnbull 3: Rise of the Mixtape

We're kicking off New Zealand Music Month early this year! Grab this year's Turnbull Mixtape and come back all through May for more amazing music. – Ed.

The day of judgement is upon us once again. Library-wide, staff have been eagerly listening to countless tracks representing the 50 or so Creative Commons albums archived by the Library over the last year, and the results are in!

But before we get to the final countdown – it has now been five years since the Alexander Turnbull Library started actively selecting and archiving digital music. With digital music now being the dominant format, outselling physical products for the first time in 2012, it has been a significant period of growth for collecting in this area. 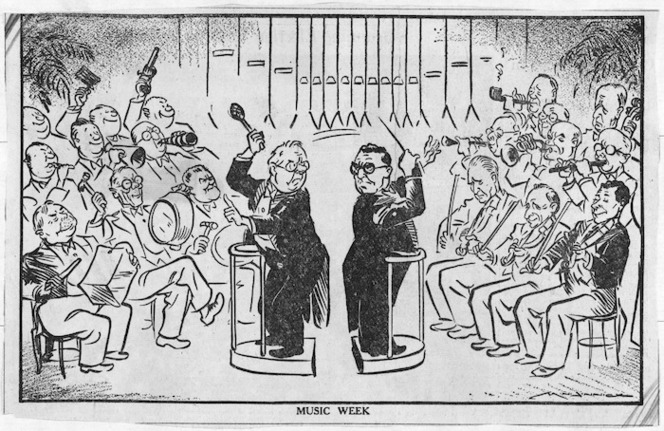 Top 5 facts and figures from 5 years of collecting digital music!

1. In five years ATL has added about 3500 digital music items to the National Digital Heritage Archive – and even more if you include the deposits made by the National Library!

4. The most releases we have archived from one artist or band is a whopping 21 by FreQ Nasty! Notable mentions also go to Minuit (20). We have also archived around 40 digital albums the New Zealand Symphony Orchestra has been involved with.

5. The most listened to track from the previous two Turnbull Mixtapes is 'Sick Chutney' by The Bing Turkby Ensemble. It may have benefited slightly from being first in the tracklist, but it is still a clear favourite.

Phew, I hope you’ve all learnt something from the last five years of music collecting. Without further ado here is the Turnbull Mixtape for 2014. Listen, download, share and comment. Did we get it right? Check out the master list of CC albums here (xls, 121kb) and tell us your favourites!

“'Press start' walks the line between swaggering and staggering into the room, making it a great way to start a mix that goes anywhere and everywhere.”

“My slight bias to punk music led me here but I really like this album and it’s now on my regular playlist. I went with the opening track as I like the dueling vocals and it sets a good tempo for the songs to come.”

“Listening to this track is a great way to transport yourself back to those lovely warm, summer evenings. The perfect antidote to the winter blues.”

“I like bacon fat and I'd probably be driven to song if I was somehow cheated out of the real thing. A tale of woe”

“With Urine (A Container) Seth Frightening (Sean Kelly) travels into much more experimental territory than on his past recordings, but as always it is his remarkable voice and love of a plaintive melody that steals the show. 'Corn Shelly' is the beautifully wistful closing track to this dense psychedelic gem of an EP.”

7. You are my mansion / Athuzela Brown

“Nice, atmospheric folksy music by this twin brother and sister duo. I like the slightly stripped down arrangement of this track and the way it builds towards the end.”

“Mmm, do like being in a pool of sound for a few minutes.”

“I can't help it, I'm a fan of the Wellington Sea Shanty Society, so how could I say no to Now That's What I Call Sea Shanties Vol. 1? 'Nelson's Blood' is representative of everything good about this band.”

“Pure psychedelic electronic spirit-pop (in their words but the description fits well) taken from 2013's concept album Spirit Hell Beings 21 There are some interesting tracks on this album and this up tempo number is my pick.”

Sholto is a Web Archivist, responsible for locating and collecting digital music and other music-related digital media.