The most exciting, the most spectacular production in the show history of New Zealand

June 12th, 2020 By Vicki-Anne Heikell
A conversation with Marie Waaka daughter of Peti Rei who performed in the show ‘Porgy and Bess’. The show features in ‘Pūkana’ our exhibition celebrating Māori performance and 100 years of the Alexander Turnbull Library. As told to Vicki-Anne Heikell.

Late last year I was in Ōtaki for Library work. Over lunch with Marie Waaka that day I mentioned the upcoming ‘Pūkana’ exhibition. This prompted Marie to recall the 1965 NZ Opera Company production of ‘Porgy and Bess’ and the subsequent tour to Australia.

The most exciting, the most spectacular production in the show history of New Zealand. For the first time the best Maori singers in New Zealand have been assembled in one group … to sing the magnificent music of ‘Porgy and Bess’. — ‘Porgy and Bess’ described in Te Ao Hou, March 1965

Mum had a beautiful singing voice

We had a cat, Porgy and dog named Bess. I guess Mum loved that show. My mother, Peti Rei had a beautiful voice and was always singing. She had auditioned for ‘Porgy and Bess’ and said it was so long before she heard back that she had forgotten she had ever done it.

I took my first ever plane flight from Rotorua to Wellington in 1965. I was 9 years old. It was school holidays and I missed my Mum. She was rehearsing for ‘Porgy and Bess’.

Auditions for the Māori cast

The New Zealand Opera Company had travelled around the country to find members for the chorus of this production. Around 250 people auditioned for 24 roles.

The Company was required to bring New York director Ella Gerber from the US to direct its production, as the Gershwin family wouldn’t allow any new productions without her participation.

My mother, a soprano, was initially in the chorus but became the Strawberry Seller after Ella Gerber heard her sing. Though the role was for a mezzo-soprano, Ella Gerber liked the sound of my mother’s voice.

Miss Gerber would sweep in and the waft of her perfume would fill the room. Every day she wore a different outfit and I thought ‘man she must be rich and how much luggage must she have brought with her’. I was captivated by her beautiful clothes, her bright lipstick, her shawls, her shoes and colourful beads.

She was stern but not unkind. Ella Gerber was fond of my mother and my mother of her. She was about the same age as my mum so perhaps they had that in common.

Ella Gerber had a reputation for working her casts very hard. 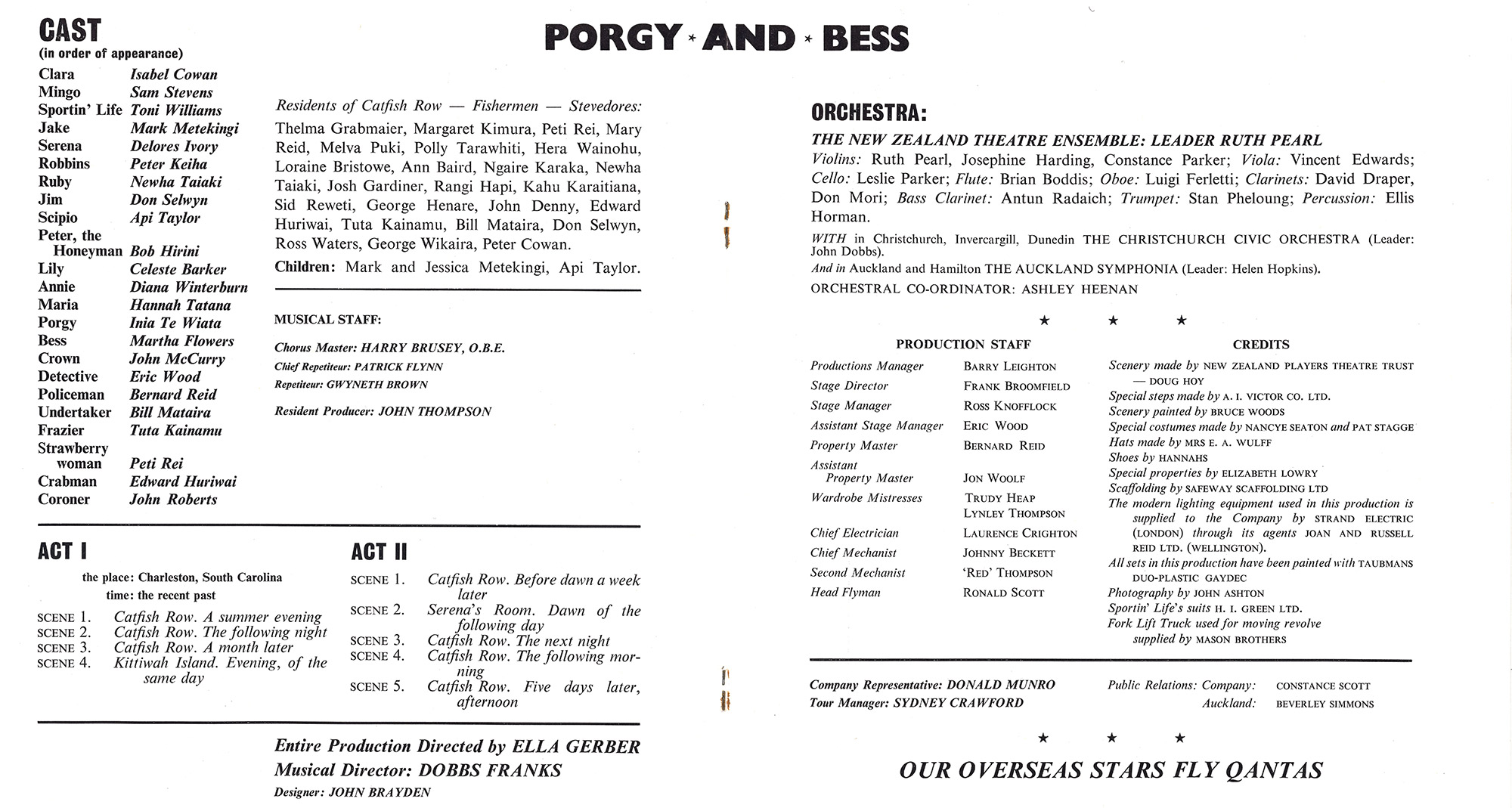 Contralto Hannah Tatana who played Maria said of her, ‘She was a wonderful producer, but wow was she a terror. I met her in January when she arrived in Auckland at Whenuapai, a lovely lady, however she got us straight into rehearsals and wow did it start out with a bang’.

My sister and I went to watch Mum in Auckland at His Majesty’s theatre. Porgy and Bess met with critical and public success in New Zealand and the NZ Opera Company secured a 5-month Australian tour with the support of the Australian Elizabethan Trust.

The NZ cast were reassembled, and Ella Gerber returned for final rehearsals. Tuta Kaimanu in welcoming her back joked ... ‘well Ella, we know what we are in for now that you’re back’. She quipped, ‘Please don’t make the people feel that I’m fierce, I’m not. I’m sweet and docile; I’ve changed terribly since I’ve been gone – I’m worse!’

I ended up in the show

Mum had declined the Australian tour because of me, ‘bring her too’ they said. Apirana Taylor, then aged about eleven, who had performed in New Zealand was unable to travel. My cousins, Mark, Jessica and Ariel Metekingi were already part of the cast. Their father Mark played Jake a fisherman on Catfish Row and their mother Karanga was in the chorus.

So not only did I accompany my mother I was in the show.

‘Porgy and Bess’ rehearsals would be all day. Every time I heard Isobel Cowan sing the hairs on the back of my neck would stand on end, she had a stunning voice.

Australian tour of ‘Porgy and Bess’

We arrived in Australia at Sydney Airport on my tenth birthday. We were greeted at the airport by a kapa haka group. We performed in Sydney, Melbourne, Canberra, Brisbane Perth and finished in Adelaide. I remember attending Norwood Normal School in Adelaide and I also did New Zealand correspondence school, but I don’t recall sending anything in or completing any work.

Australian child labour laws meant I could not work more than two days in a row, so Jessica and I would alternate. I didn’t have a singing role. My role was to run into Porgy’s arms while he was grieving for Jake (Act 3); and to take around the collection plate . The boys shared the role of Scipio.

I do recall the wardrobe mistress and I were sent shopping in Sydney to get a colourful outfit for the picnic scene (Act 2). I picked out a shift dress — I loved it. We returned and I proudly showed Ella. She was most annoyed that I had been allowed to pick out such a modern dress. I didn’t get to wear that dress on stage, instead it was a frilly blouse, a pink gathered skirt and a straw hat. I got to keep that shift dress.

Mum and I spent Christmas in Melbourne in a big terrace house with some of the other cast members Rose and Jim Pūriri and their children who had come over for the holidays, Newha Taiaki, Gutch Parahi and others.

I was spoiled by the cast — I got heaps of Christmas presents that year. Delores Ivory who played Serena gave me a recorder and recorder lessons for Christmas. Dolores had her own dressing room. She was glamourous. I remember all the wigs on her dressing room table and her fur coats. She had a white fur coat that she let me wear. She was lovely.

End of the tour

The tour came to an end, we returned to New Zealand and our homes and I returned to school. Many of the cast made a choice to stay in Australia and further their careers.

Mum didn’t ever do any further professional productions, but she features on ‘Waiata Māori: Inia Te Wiata and the Māori Theatre Chrous’ and ‘Haere mai’ (1968) NZ Opera Maori Chorus.

Have a listen to one of the Pūkana curators, Paul Diamond, talk about ‘Porgy and Bess’.

Vicki-Anne (Te Whānau-a-Apanui) is Field Conservator in the Outreach Services Team of the Alexander Turnbull Library.