Some features of our website won't work with Internet Explorer. Improve your experience by using a more up-to-date browser like Chrome, Firefox, or Edge.
Skip to content

A letter about a new artwork created for the Mīharo Wonder exhibition.

A letter from Mīharo Wonder

I thought I'd write and tell you about the Mīharo Wonder exhibition at the Library in Wellington. I've visited the exhibition several times (it's free :)) and every time I've been, my curiosity has been piqued.

What’s Mīharo Wonder all about?

The Mīharo Wonder exhibition has been curated by Fiona Oliver and Peter Ireland to celebrate the 100th anniversary of the Alexander Turnbull Library. I hadn't heard the word mīharo before so looked it up in the Māori dictionary and it means ‘to wonder at, admire or be astonished’.

The first thing you see as you are heading to the gallery, even before you enter the exhibition, are a display of very large hīnaki | eel traps. The artwork, called He Mahi Kupenga, was commissioned for the Alexander Turnbull centenary and created by artist Matthew McIntyre-Wilson. I was drawn to its simplicity and structure. 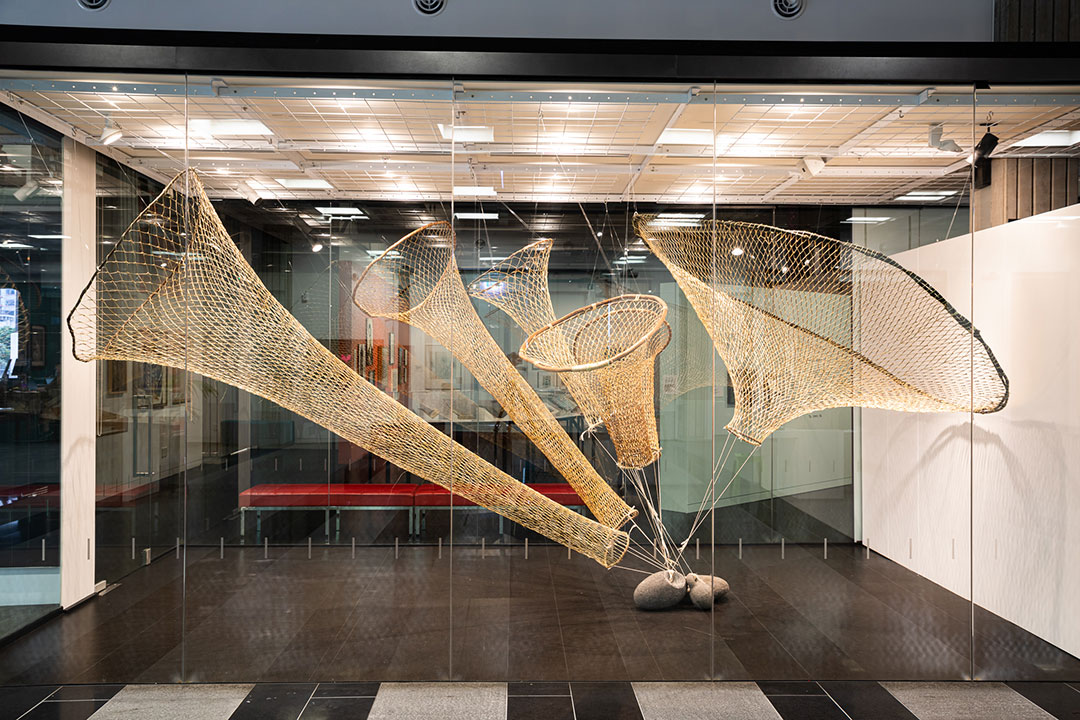 I've included some more photos of the artwork in this letter. I've also included the wall label text (yes the wall text). I found it helped me understand what I was looking at as well as making me think. Also, Bill Manhire’s got me obsessed with wall labels, more on that later.

So the wall label text about He Mahi Kupenga and Matthew McIntyre-Wilson its maker.

Matthew McIntyre-Wilson (Taranaki — Ngā Mahanga, Titahi) is a jeweller and weaver who explores the whakapapa of raranga (weaving). He makes extensive use of museum and archive-based collections of Māori taonga, seeking to reconnect the objects with their maker and their lived history.

‘My work is mostly known for its intricately woven copper, silver and gold taonga such as kete, armbands and hīnaki. Research into collections and archives provides me with the opportunity to examine the technical making of taonga Māori. Of particular interest is the creation and variation of complex woven patterns. Examining objects often leads me to discovering techniques and patterns used by makers who I will never meet.

I am interested in highlighting many unknown makers in museum collections and what they can teach us now.

In 2019 I was asked if I would be interested in making this work, and what first came to mind was the numerous ways in which knowledge is collected and stored over time. The beginning of my investigation into the technical making of kupenga was ‘The New Net’ (harakeke, kareao, muka, kōkawa), exhibited at The Dowse in Lower Hutt as part of Solo2018.

I looked to many sources to learn the netting knot. Te Rangi Hiroa documented the knots, construction methods and application for different nets. Ngā Taonga Sound and Vision holds film footage of net-making collected by the filmmaker and photographer James McDonald while on Dominion Museum expeditions in the early 20th century. Toanga Tūturu in museum stores hold a wealth of history.

My aim is to create a continuum of information and knowledge sharing through object making.’

In 2020 the Wellington-based artist held the Tylee cottage artist’s residency in Whanganui and had the chance to make connections with the river, the hīnaki (eel traps) held in the Whanganui Museum, and in some cases, those which are still
in use on the river.

The Alexander Turnbull Library commissioned this new work from Matthew for Mīharo Wonder as an apt metaphor for its centenary year. It represents the library’s gathering-in of taonga, and the understanding that comes with it of the lives of the original makers or owners.

Gathering-in of knowledge was a passion for Alexander Turnbull, whose collection formed the basis of the library. Of the intention for his collection he said, ‘anything whatever relating to this Colony, on its history, flora, fauna, geology and inhabitants, will be fish for my net, from as early a date as possible until now'.

I am fascinated that Matthew has used film footage from Ngā Taonga Sound and Vision collected by filmmaker and photographer James McDonald to help him with this project. If you are interested Dame Anne Salmond talks more about how this film footage came about in a lecture she gave earlier this year. James McDonald is Dame Anne's great-grandfather.

Photos of He Mahi Kupenga

Here are the photo’s I mentioned. There are a number of Matthew installing He Mahi Kupenga as well as a close up of the knotting technique mentioned in the wall label. 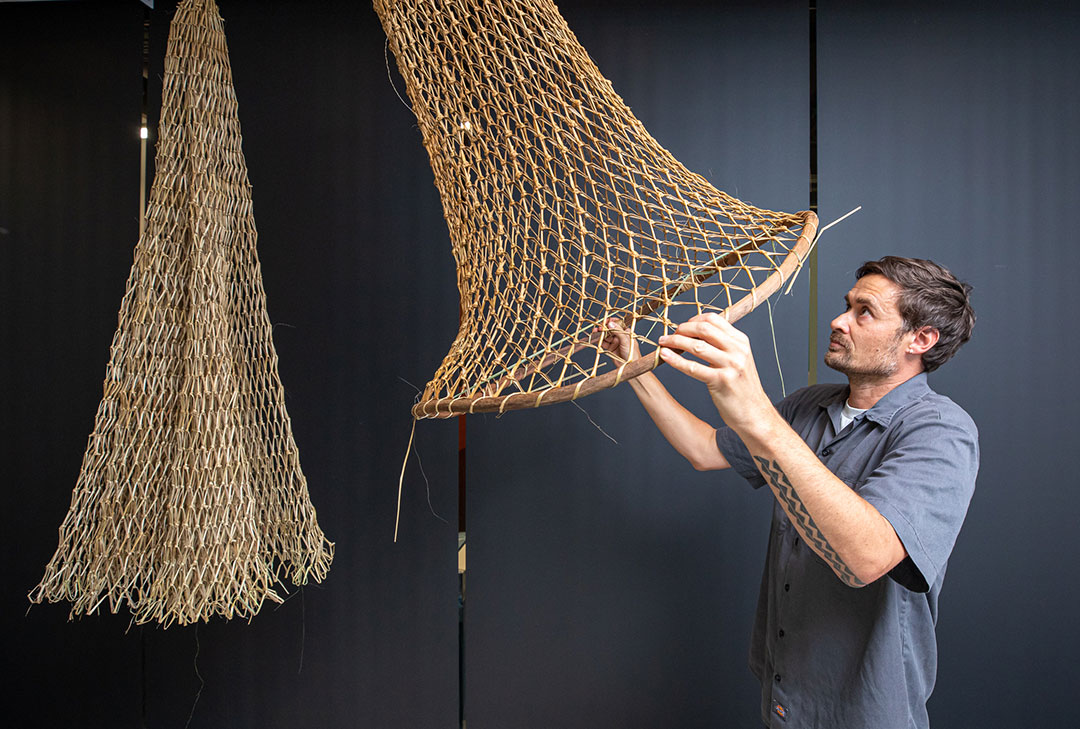 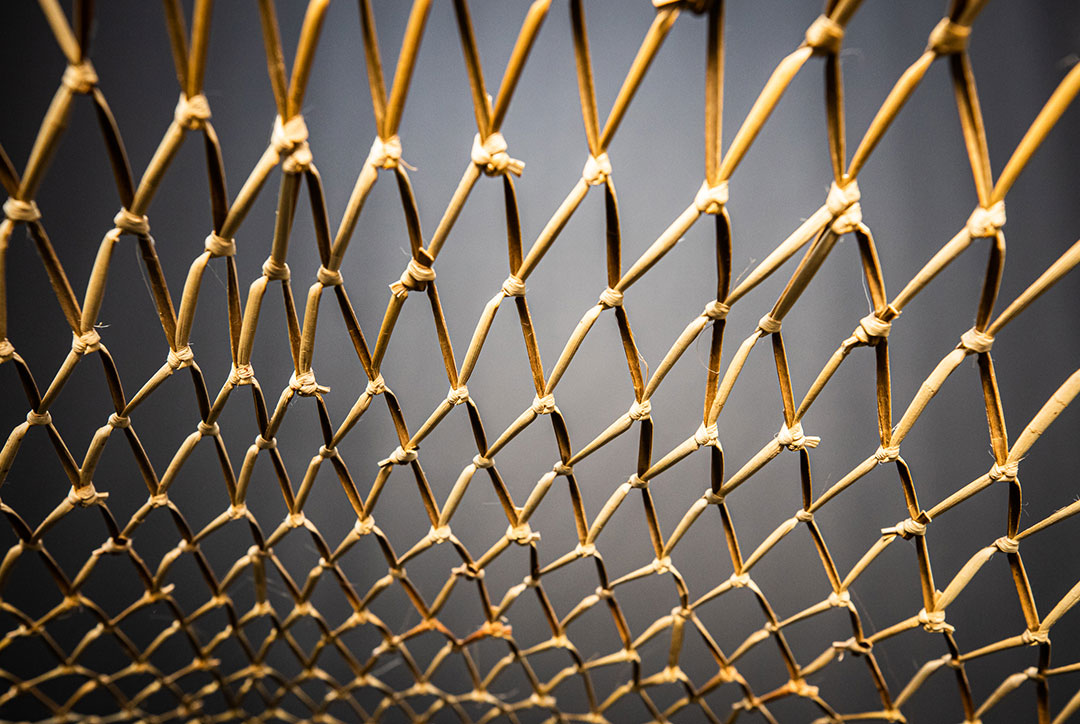 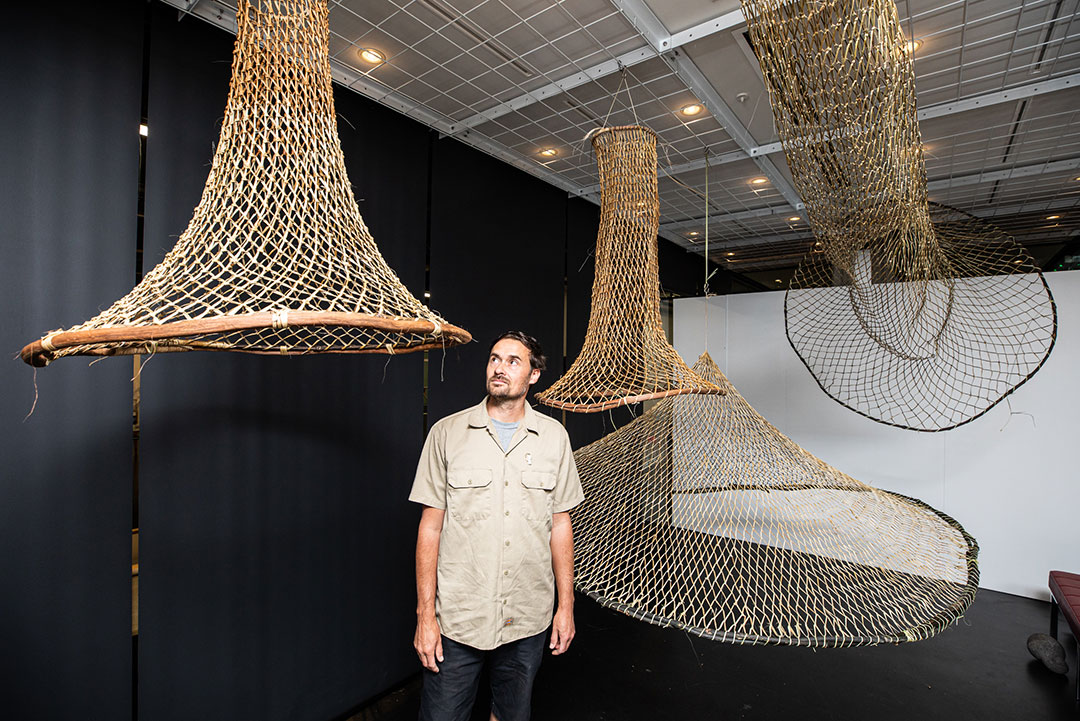 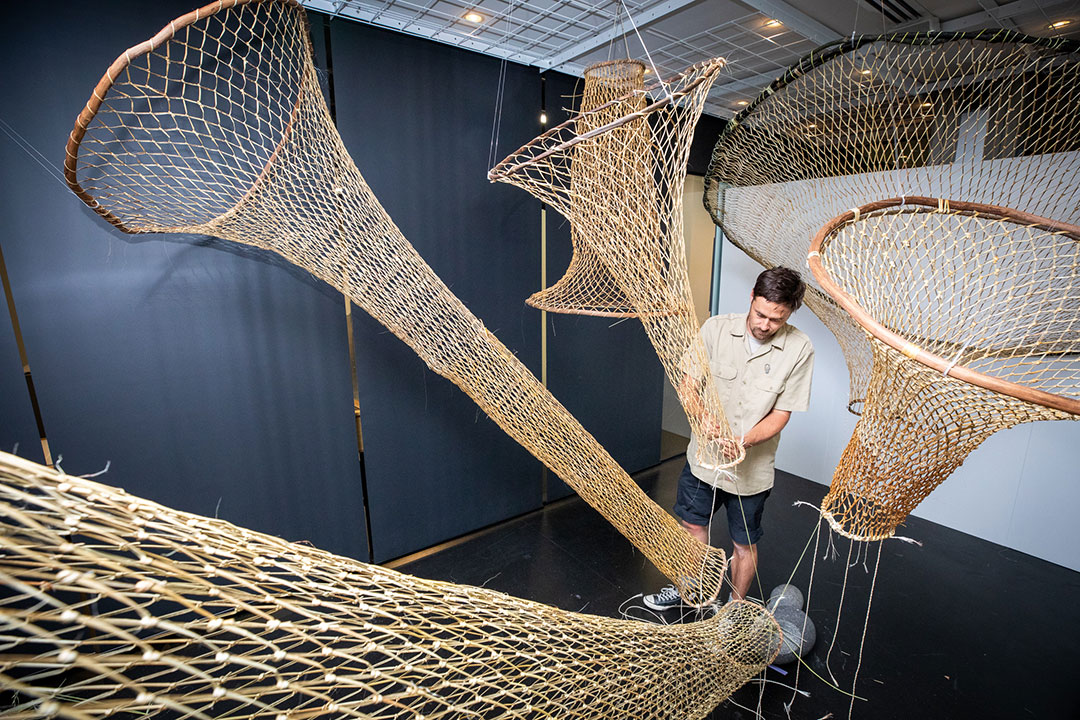 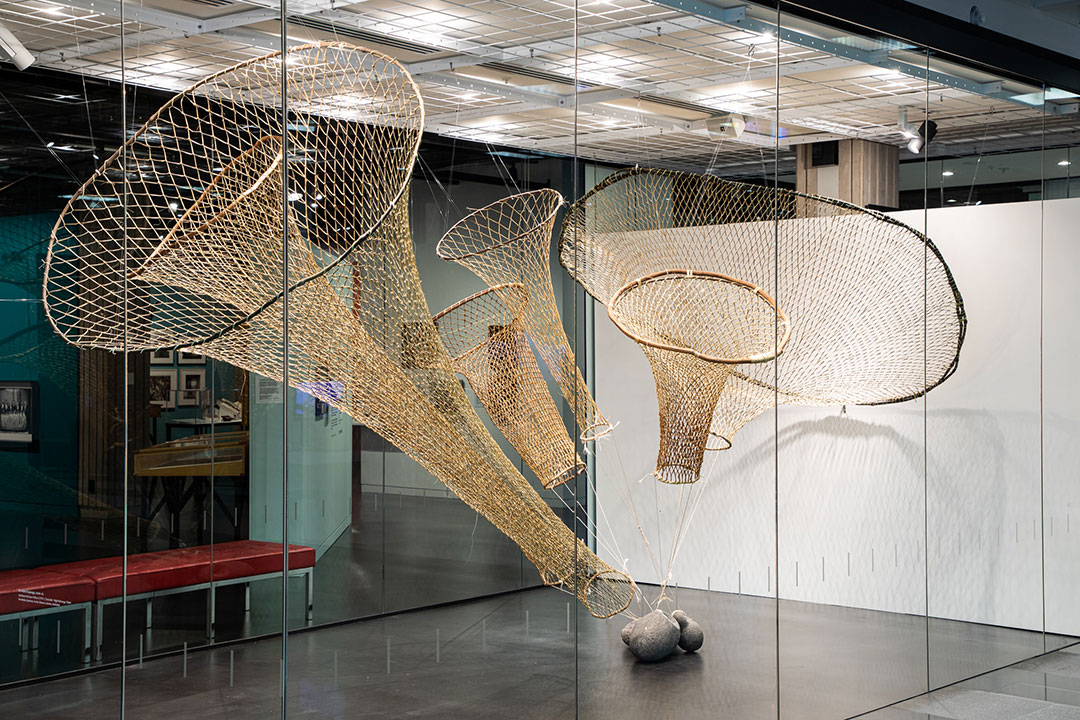 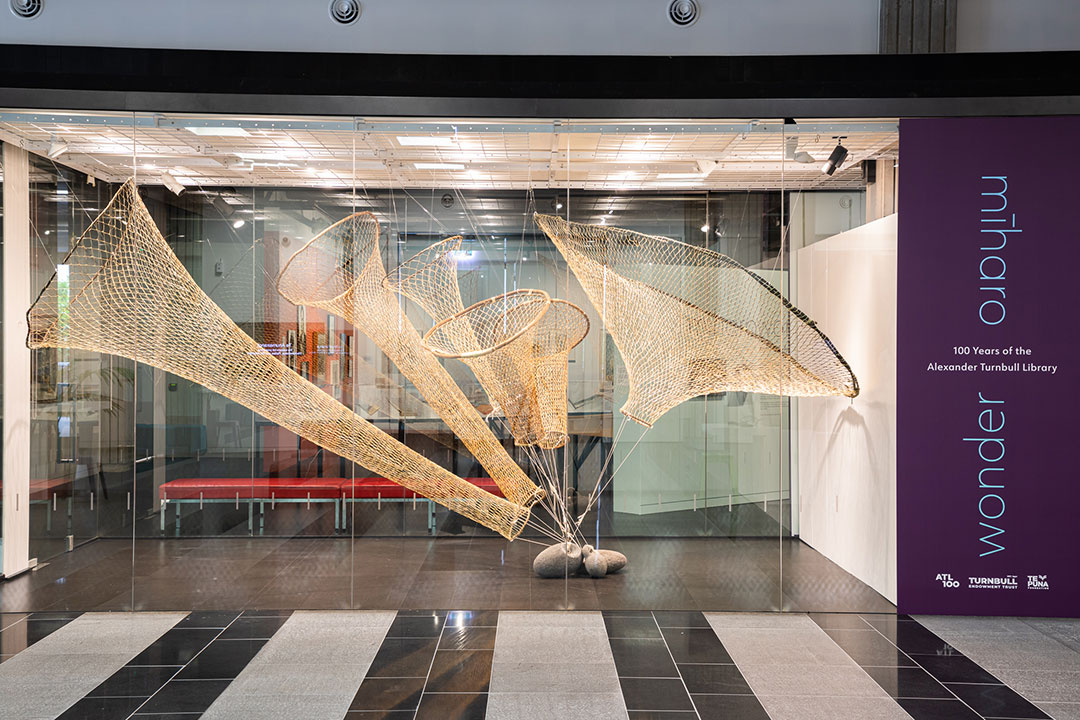 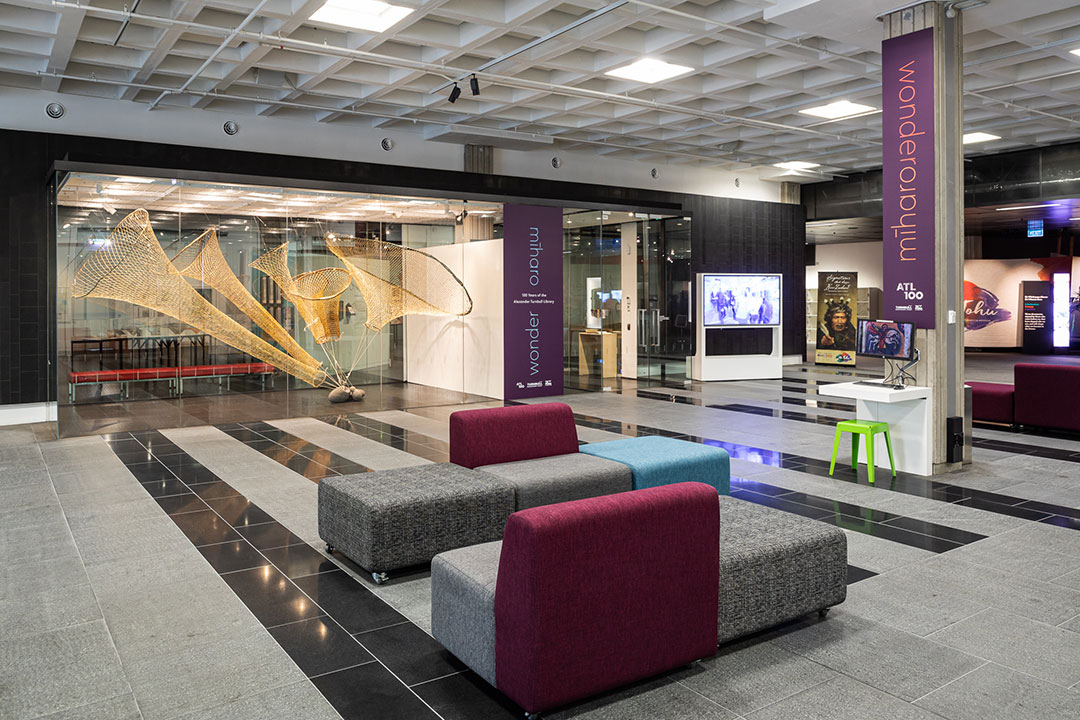 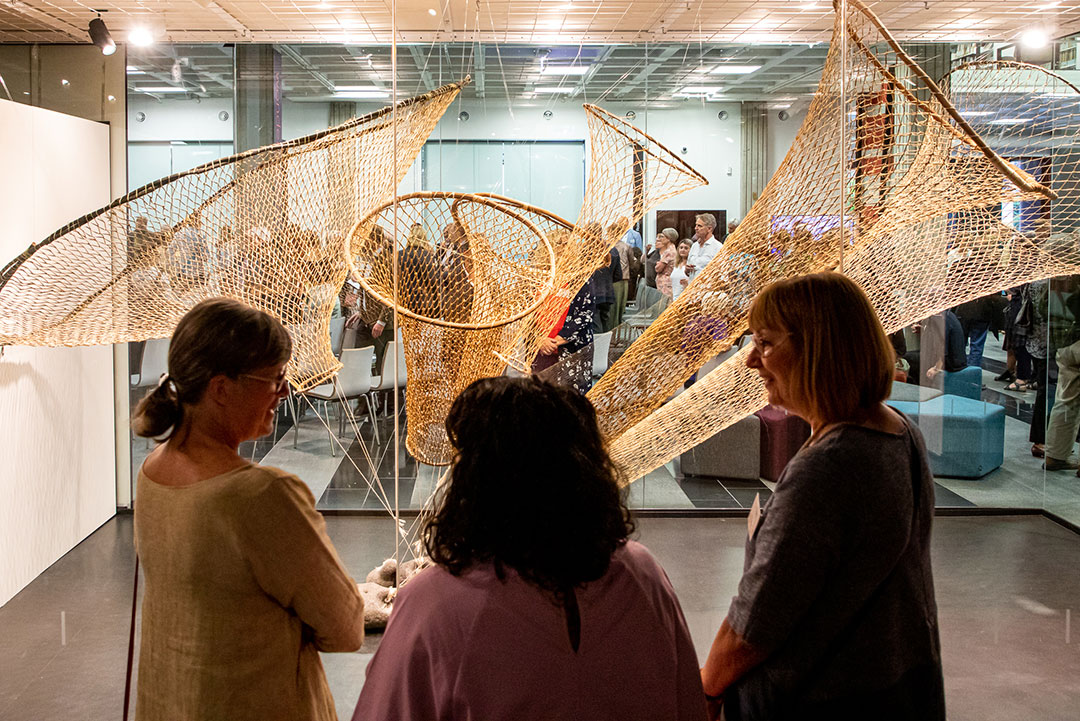 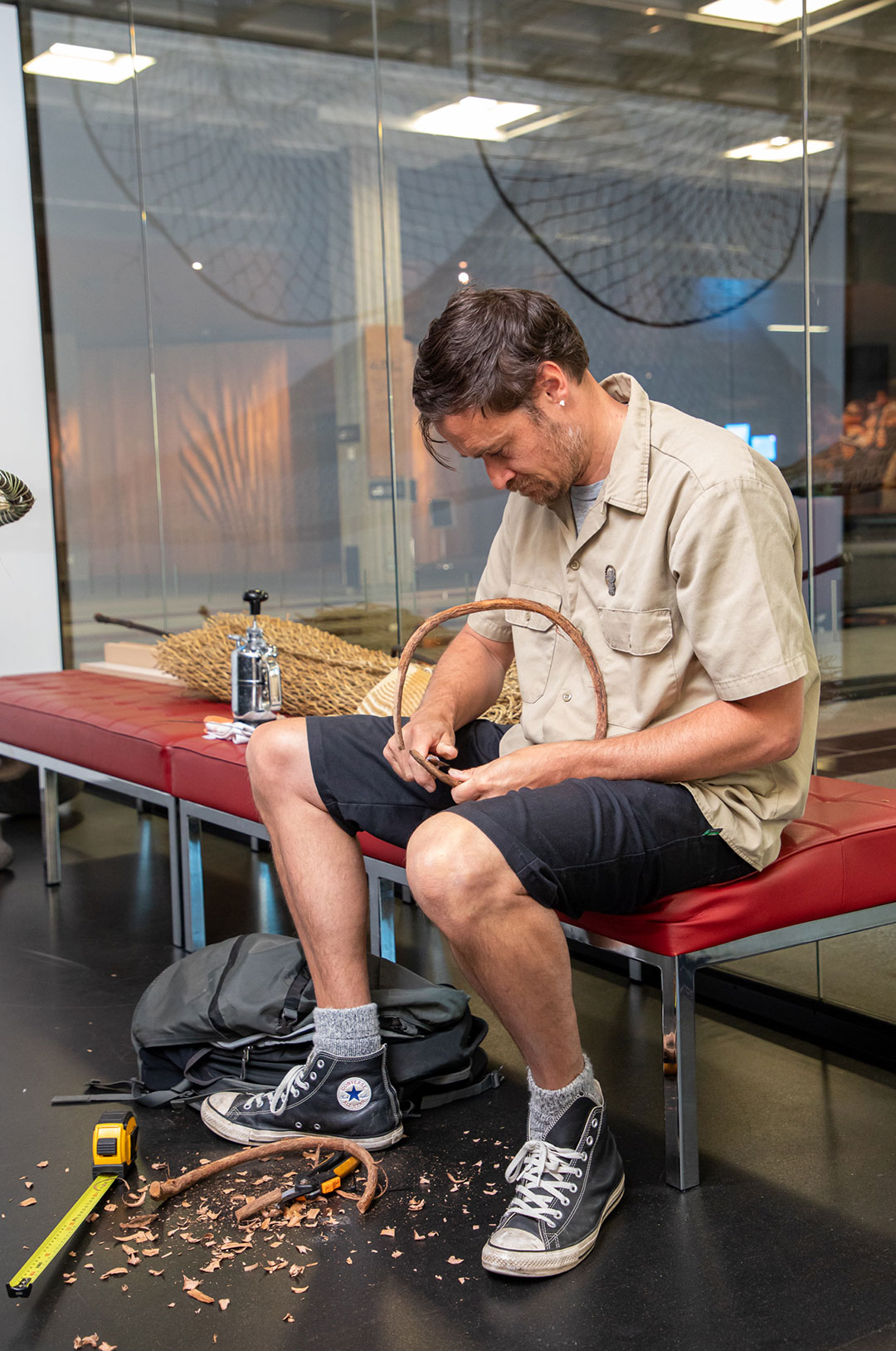 Bill Manhire made me look

I started taking notice of the label content at the exhibition after I saw a tweet from Bill Manhire saying he might have found ‘his favourite interpretive label ever’ while he was at Mīharo Wonder. He was talking about this label.

We don't know this woman's identity, or the name of the wilful little girl whose hand she holds. Conspicuous in her other hand is a note or perhaps a folded letter, on it words we'll never know nor their bearing on our sitters’ expressions.

Thanks Bill you've encouraged me to really look at the labels.

Here is the picture that goes with the wall label.

You might like to have a look at the Mīharo Wonder exhibition that was developed to accompany the physical exhibition at the Library.

PS Next time I write I'll tell you about the William Harding photos on display in the exhibition.

PPS I wondered if the thing in the woman's hand was a hanky? ;)

Mary is the online editor at the National Library.