Sorry folks!
Some features of our website won't work with Internet Explorer. Improve your experience by using a more up-to-date browser like Chrome, Firefox, or Edge.
Skip to content

Flying Nun in the spotlight

In the first of two NZ Music Month blogs, we look at progress on the Flying Nun Project to completely digitise and preserve the label’s master tapes donated to the Library in 2018. Claire Viskovic charts the digitisation of these precious collection items.

This year marks the 40th anniversary of the founding of New Zealand’s iconic indie record label Flying Nun Records. Celebrations are well underway and the Turnbull Library has some offerings to bring to the party! Here is the first of two NZ Music Month blogs that take a detailed look at progress on the Flying Nun Project to completely digitise and preserve the label’s master tapes donated to the Library in 2018.

Since October 2018, the Imaging Services Team at the Alexander Turnbull Library has been plugging away, creating digital image files of the physical objects from the Flying Nun Records (FNR) music collection.

The physical items in the FNR collection are being documented (digital image capture) because of the significance of this collection to New Zealand music and music history within Aotearoa New Zealand.

Items we’ve photographed include DAT tapes, cassettes and open reels in 5”, 7”, and 10”. To date, over 800 physical items have been photographed, comprising over 4,000 images. And this work is done between other image requests; both public and internal, for exhibitions and publications or research purposes.

Creating digital facsimiles of the audio and object

Only after the conservation assessment of the physical condition of the items and the careful arrangement and description process (so that each item has a descriptive record) can digital capture of images take place.

Following the photography and post-capture edit QA (Quality Assurance), the physical items and the image files are passed to the Audio Visual Conservators, Nick Guy and Zach Webber.

After all of those steps, they begin to work their magic in creating the digital audio files from the sound recordings (something we'll explore more in our next blog).

Together, the sound and pictures create digital facsimiles of this historical collection; so that Flying Nun aficionados and kiwi-music enthusiasts of the past, present and future can find, see, hear and enjoy the Flying Nun Collection. 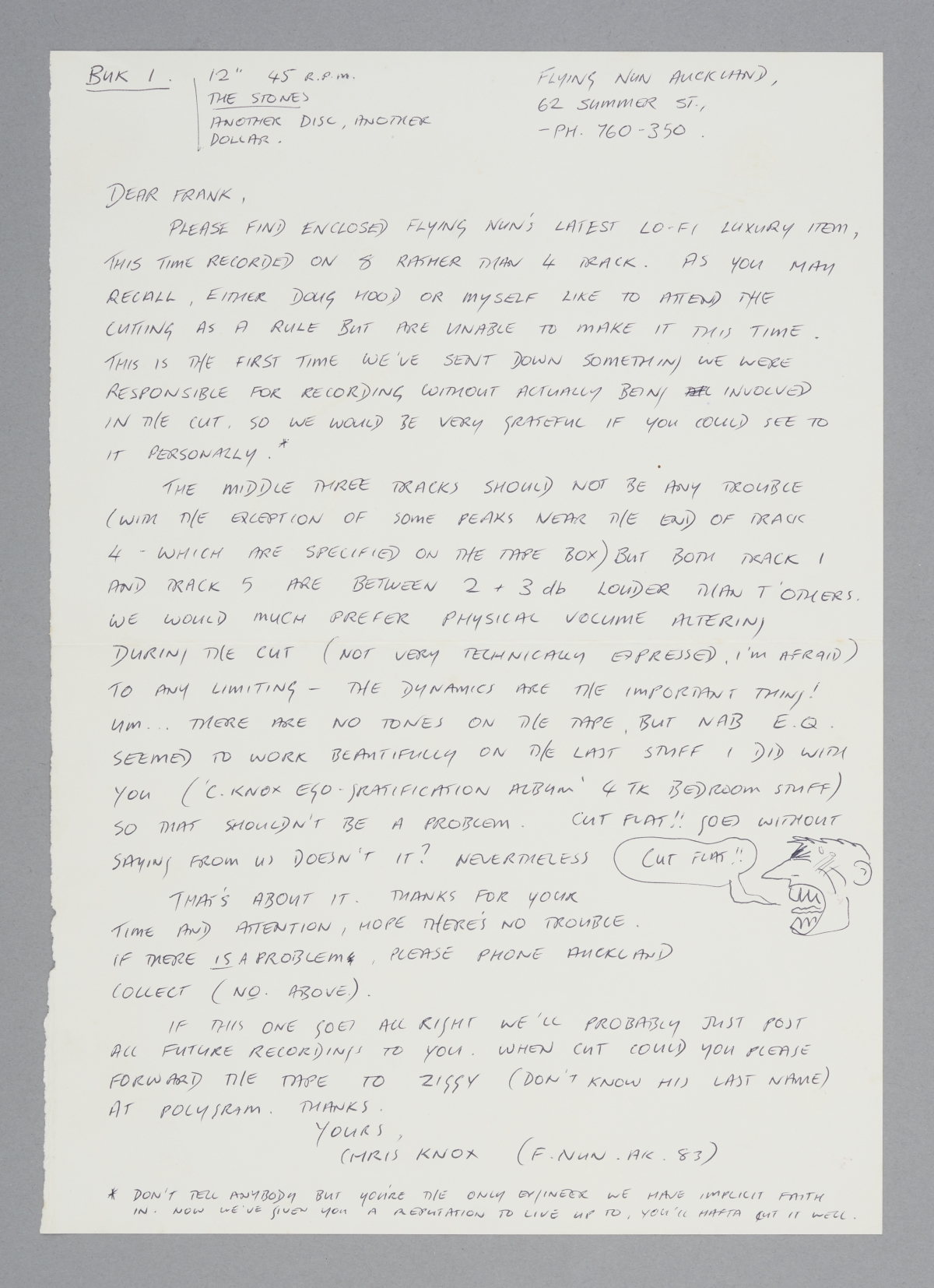 Initially, the Imaging team had a rotating capture set up in our large format photo studio, where most heritage material is photographed; which meant setting up and breaking down Flying Nun set-up each time we changed between FNR capture and our other imaging work.

The set-up we used until recently entailed bits and pieces we had to hand in the studio — some from when the studio was film-based, such as old backdrops and diffusion fabric (affectionately known as ‘the shower curtain’); and a piece of chain to help hold up our light tent, now less resilient because we’d chopped it around a bit to customise it for using both front and overhead camera capture. But then most photographers are pretty resourceful, and use/re-use whatever is close to hand so that they can make fit for the purpose required!

Some months into the project we realised we needed to make a dedicated space for the Flying Nun capture work; to streamline production and increase our throughput of images. Less changing around of studio set-ups (when working with other formats and heritage items) would save us quite a bit of time.

We moved our FNR capture set up into the next room over, our existing small-format studio, which we have now dedicated for that work. New flash lights and power pack have been purchased, and our legacy Hi-Glide rail system has been brought out of retirement. This helps to maximise the space in our small studio by fixing the lights to the ceiling avoiding the need for extra stands.

We also purchased a 2nd camera stand (for the large capture studio) – so that we could repurpose our existing camera stand solely for the Flying Nun studio set up.

Made to order Manfrotto camera stand

Ordered in April 2020, the shiny new Manfrotto camera stand (coming from Italy and made to order) got caught up in the escalation of the global Covid-19 pandemic. This meant delays, missing parts and complexities for the manufacturing process firstly; and then secondly, difficulties with the availability of a ship to deliver it to New Zealand.

We were relieved when the stand did arrive safely in New Zealand, in late Feb 2021. One of the two packages containing the stand parts managed to get lost, just for a bit, on its way from Auckland to Wellington. But the complete stand finally arrived here in March 2021; almost a year from when we placed our order.

Another purchase (yet to arrive) is a set of diffusion panels on stands, which can be positioned close to the capture area, but will allow the photographer better access into the space to set up and remove the items being shot. They will also allow us to use the full width of our backdrop rather than being restricted by the droopy chopped-about light tent. Plus, no more shower curtain!

The pièce de résistance was a Pet Grooming Table to be utilised as a capture table. The idea for this came from Andrew Bruce at The National Gallery in the UK. We have referred to it as the P.E.T. table – so as not to cause undue stress to our conservators or clients, who might wonder ‘what on earth we are using…?!’ Let me stress: it is brand new and completely unused until it got to us. I also like Andrew’s suggestion for us to name it B:ARK short for Bench: Ascending Robot Kinetic.

This table works exceptionally well as an adjustable height baseboard, on which to set up the backdrops, light tents or diffusion panels, and the Flying Nun heritage items! It has an electric motor and moves smoothly between floor height up to 95cm. It is very stable, so good in fact that our colleagues at Archives NZ also purchased one for their digitisation studio.

We take great care to ensure anything remotely magnetic is kept far away from the tapes, as we’re photographing them; so as not to cause any (irreversible) damage to the magnetic tapes which carry the sound recording of the FNR collection items.

Having a dedicated space for the FNR set-up has enabled us to increase our digitisation numbers. We can now have one of our small but enthusiastic team of Imaging Tech/Photographers ‘assigned’ to work on the project at any time, so the throughput of FNR items and creation of images is running smoothly and keeping up with expected targets and outputs.

Here are some of the more memorable Flying Nun items digitised by our dedicated Imaging Services team:

Llewelyn Jones liked this illustration on a little 5” reel box containing a recording by The Clean. It is kinda cute and creepy at the same time. Chris Knox is well known for his illustrations and visual artwork related to Flying Nun as much as for his musical work. With his artwork being so integral to the music it is not surprising that these little doodles also appear occasionally throughout the collection.

Although these ephemeral illustrations are uncredited they bear Chris’s distinctive style.

Hidden leader tape for the 3D's EP no. 2

Alicia Tolley chose this 3D’s 7” reel, which was a bit unusual in that it includes the EP information on the leader tape: “Tail. Side One. 3D’s EP No2. Fish St Studios DN NZ”.

Leader tape is nonmagnetic tape used to mark the beginning, end and occasionally between songs of a magnetic tape recording. This text was picked up by Audio Video Conservator Nick Guy, who returned the item to the imaging studios for this additional photographic documentation.

The master tapes for this EP contain the only hidden leader tape text we have come across so far.

Mark Beatty chose the inside cover of this 7” reel by The Puddle titled Pop Lib as a favourite. I like how they have personalised it with some final words that connect to each song or reveal the inspiration. Any song with “token psychedelic freeform freakout” has to be listened to, in my book.

I chose these Look Blue Go Purple items as a favourite because I have fond memories of listening to LBGP when I was at design school back in the 80s!

I still have some of these songs on my iPod now.

When we mention we are digitising the FNR collection, people outside the Library are often quite envious that we get to see and work with such an iconic music collection. There is definitely something special about Flying Nun Records, which began at a time when New Zealand was striving to have a voice of our own and not just a replication of overseas music sound or trends.

FNR music reflected an independent, somewhat rebellious time creatively that was also found in the politics and protests of the day (think Rainbow Warrior and Nuclear Free NZ). The music also heralded the distinctive ‘Dunedin Sound’. It reflected who we were (or wanted to be) as Kiwis at that time. And beneath the societal changes and struggle, of course, it was still about the music, which continued into the 90s and beyond.

The Flying Nun Records collection provides New Zealanders with a record (no pun intended) of that past and will be an inspiration for the future, for musicians to continue to produce different and amazing music! The subsequent transformation of recording technology to digital formats, streaming and mixing provide many new possibilities.

The FNR collection is held in perpetuity at the Alexander Turnbull Library. Its digitisation means it is no longer at risk of loss due to tape degradation and technological obsolescence. Who wouldn’t want that as their day job? It’s perhaps not as glamourous as it might sound, but it’s a great project to be a part of.

Thanks to Michael Brown, Nick Guy, Denise Roughan, Barbara Ward, David Kilgour and Flying Nun Records - for their permission, input, expertise and enthusiasm in helping make this blog happen. And to you too Jay!

Read part two of this series of blogs about the Flying Nun project: Flying Nun in the studio.

Claire is the Senior Imaging Technician at the Alexander Turnbull Library.