Some features of our website won't work with Internet Explorer. Improve your experience by using a more up-to-date browser like Chrome, Firefox, or Edge.
Skip to content

'Time is the longest distance' was an exhibition installed in the Courtenay Place Park light boxes from October 2020 to January 2021 that explored the relationship between photography, archives and memory.

Time is the longest distance

TOM: “I didn’t go to the moon, I went much further – for time is the longest distance between two places…” – Tennessee Williams, The Glass Menagerie

Lyall Bay, Wellington, 1931. People crowd around the scene of an accident. Photographer Sydney Charles Smith captures a dramatic view of the commotion in black and white. There’s a motorcar on its side in the middle of the street, a driver with goggles standing with a policeman in a helmet, men in hats, women in furs. It’s a sight far removed from today but somehow strangely familiar.

There are the Wellington hills and Wellington houses. A child is being held up for a better view (or to be kept safe as Dad has a look?). Another child keeps a tight grip on an adult’s hand. Some schoolboys have made it to the front – the prime viewing spot. 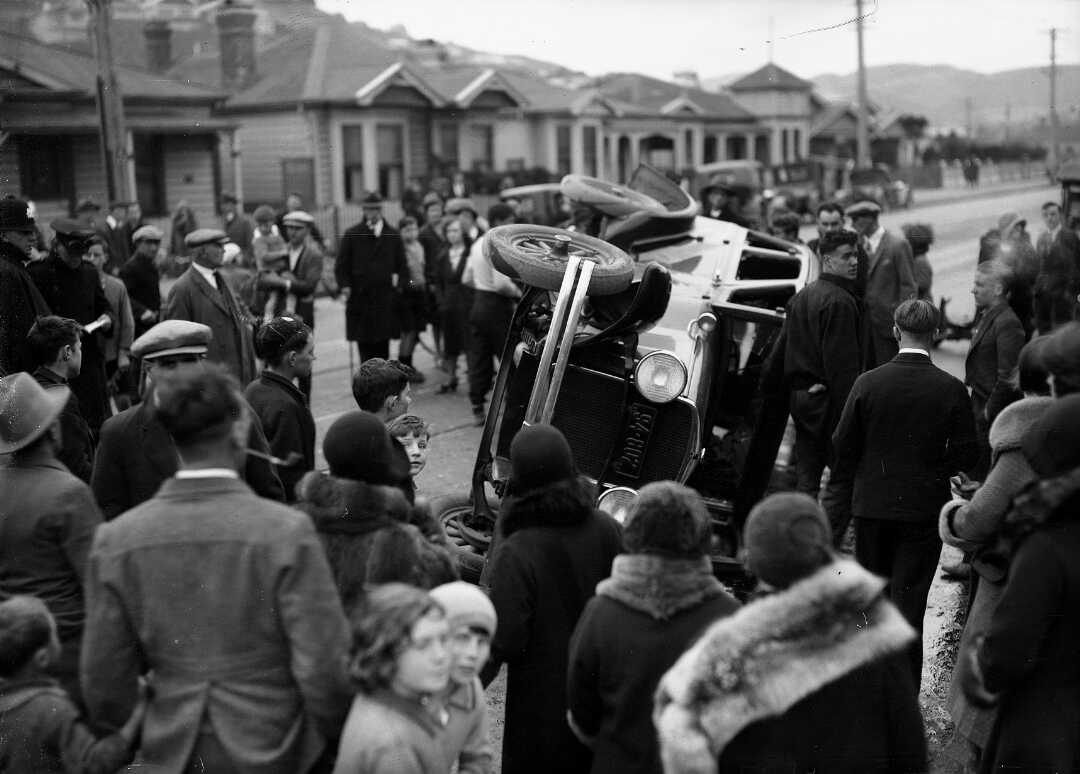 As Smith captures the scene one boy appears to turn and catch sight of the camera. His image remains like that, ninety years on, frozen on a glass plate negative.

This image was one of sixteen I selected and re-photographed for Time is the longest distance, an exhibition installed in Courtenay Place Park’s lightboxes from October 2020 to January 2021. For those four months, the boy in the photograph appeared again but in a way Sydney Charles Smith could never have envisaged – suspended in an illuminated print three metres tall, gazing out night and day at the passers-by of Courtenay Place.

Relationship between photography, archives and memory

Time is the longest distance was about the relationship between photography, archives and memory. What role does photography, and how we use photographs, play in how we remember? We know that human memory is subjective, extremely fallible and constantly changing, even if we don’t realise it (and we usually don’t). Photographs, however – and especially the cold-stored, conservator-tended negatives of the Alexander Turnbull Library – barely change at all.

We often build our memories around photographs that we know intimately – usually of people we know, from our childhoods, or homes or special places – but we’re always bringing our shifting viewpoint to an image that is itself unchanging.

Perhaps the way we keep and view images change our memories. Perhaps the way we build memories around photographs changes the way we remember. Thanks to Wellington City Council’s Public Art Fund and the Alexander Turnbull Library I had the opportunity to take these ideas a step further.

Institutions like the Turnbull, and the dedicated professionals who work there, serve a kind of collective memory function, selecting and preserving what we as a wider society deem worthy of preservation. For Time is the longest distance I trawled through the Turnbull’s photographic archive across a range of subjects and scenes from the 1920s to the 1980s – a period approximating to living memory.

Some common threads tied the selected images together: they were all made in Wellington’s public spaces and are focused on a human element seen from a straight-forward point of view. I wanted the kind of scene you may have come across yourself had you been walking down Lambton Quay or Courtenay Place in the 1950s or spotted a commotion around a car accident on the way to school in Lyall Bay in 1931.

It’s easy to forget that the images of photographers like Sydney Charles Smith are scenes partly crafted by their maker, and not an objective reality. In Smith’s photograph, we’re viewing the scene of the car accident in the way Smith chose for us to see it, made by the way he used and moved the camera, and by the moment he decided to photograph.

For Time is the longest distance, negatives made by known and unknown photographers were re-photographed in huge detail, cropped, enlarged and installed as a public art series on a busy street. The context is far removed from the original negatives and in a way that constructs a new meaning for the images. I’d like to think the installation was another little thread of life pulled out of the original photograph. 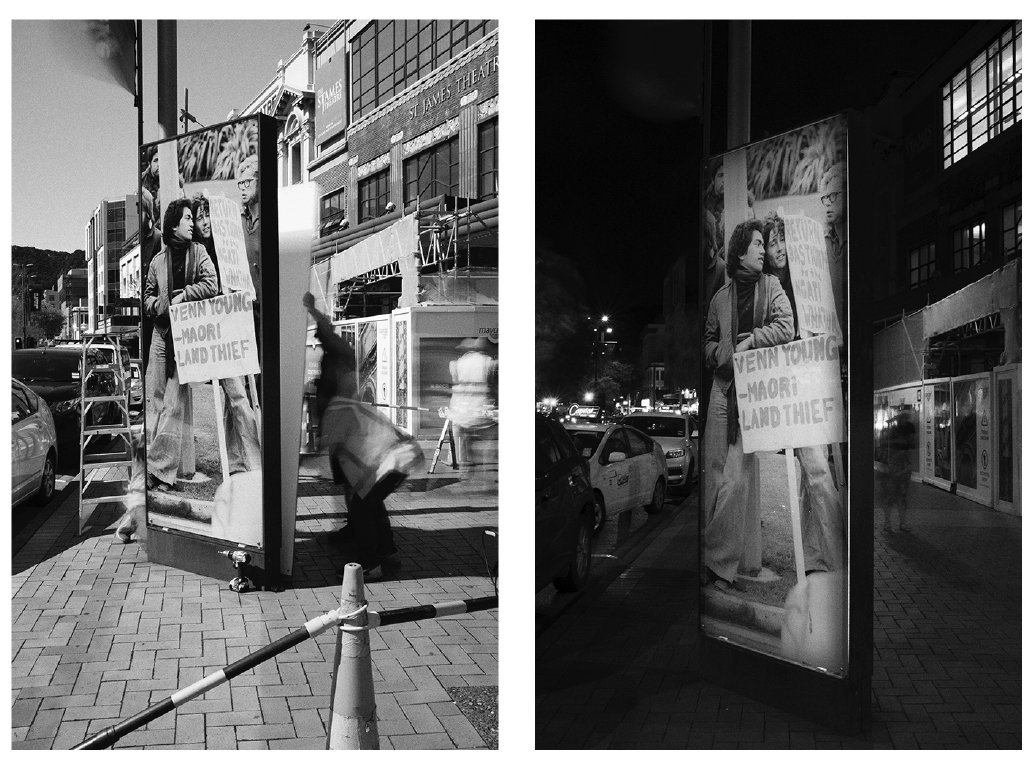 Of the sixteen images chosen for installation on Courtenay Place one has had a particularly long and winding journey. Wellington Thomas Gordon Cody (1897-1946) was an amateur photographer who left behind a small but captivating collection of images, including a beautiful photograph from around 1930 of his father feeding pigeons in Wellington’s Pigeon Park, now known as Te Aro Park.

Cody’s photographs of nature scenes and family portraits ended up with his niece Patricia Fry (1924-2019) who featured in some of the images as a child. In 1976, interested in printing some of the negatives, she took Cody’s images into a Wellington store where they caught the eye of PhotoForum society member Steve la Plant. The result was a Wellington exhibition of Cody’s images at the Taj Mahal gallery, now the Welsh Dragon Bar, in August 1976. 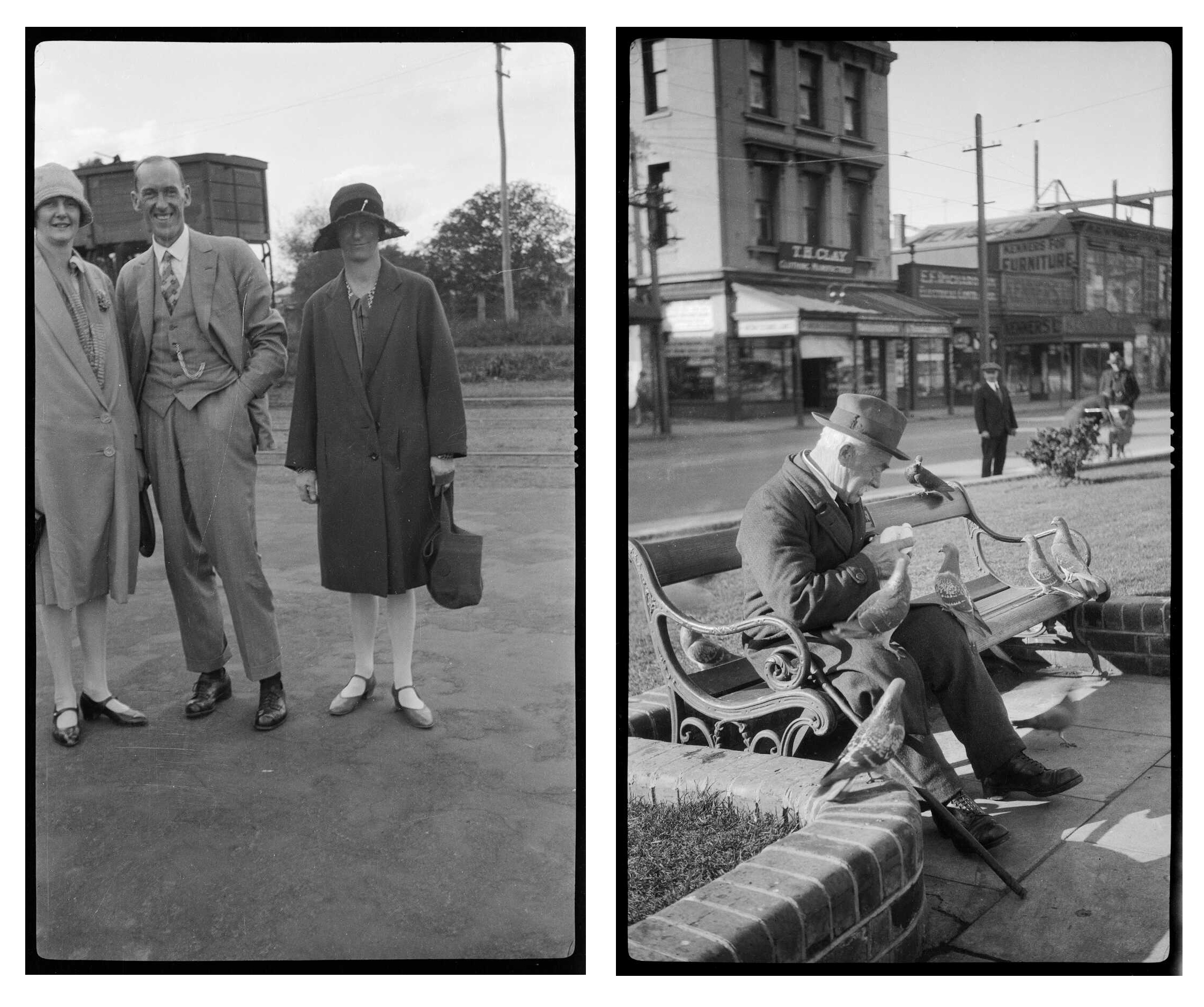 “Simply a record he kept of the things he loved”

‘Almost nothing is known about Cody himself apart from the major events of his life – World War I, work in the Post Office, 14 children…

…he couldn’t afford too much photography. He only took a few more than 100 pictures with his 116 format camera but each shot was carefully considered, the camera put on a tripod and sometimes the time-release would allow Cody to come around and be part of the picture.

It was like that, photography was not something he was doing for the world, it was simply a record he kept of the things he loved.

Now fifty years later, because Steve la Plant, Jeff Worsnop and Anne Noble cared sufficiently to make fine prints from his negatives, the way Wellington Thomas Gordon Cody saw the world is handed on to us. For an unpretentious man, it’s a fine legacy.’

Writing in the May 1996 New Zealand Journal of Photography, Bill Main reflected on the 1976 exhibition and the legacy of Cody’s images. He was particularly struck by ‘the ability of Cody’s photographs to communicate all sorts of messages from the time in which he lived.’

Thanks to the Alexander Turnbull Library and its staff, the way many people saw the world continues to be handed on, giving us the chance to see what we can in their images. Patricia Fry gave her uncle’s negatives into the care of the Library, which is where I came across them in 2020. Ninety years after Wellington Thomas Gordon Cody made his photograph it had another piece of life, re-worked, re-imagined, a stone’s throw from where it was taken.

Time is the longest distance was made with funding from Wellington City Council’s Public Art Fund. I would also like to note the work of the Turnbull Library - the photographic conservation and curation staff, and the library assistants whose work make exhibitions like this possible, now and into the future.

Camus was contracted by the Library during digitisation of the Flying Nun Records archive.