Shows a coat of arms flanked by Maori warriors with taiaha and musket. The coat of arms is quartered, with tui on fuchsia excorticata and European lions, castles and chevrons; it is surmounted by a crown, and includes a motto in Latin and English.

The red wax seal shows the same image stamped into it.

Date estimated to be about 1825 or 1840. In 1820, Baron de Thierry met Thomas Kendall and the chiefs Hongi and Waikato in Cambridge England, and arranged for Kendall to purchase land in the Hokianga for him; this was done in 1822. In 1824-1826 de Thierry was at times in Paris, where he operated a bazaar with an associate Baker, at 359 Rue St Honore (See J D Raeside's "Sovereign chief; a biography of Baron de Thierry" (Christchurch, 1977)). At this time he offered the French Government his Hokianga land on condition that he be appointed governor. He claimed that Maori chiefs had appointed him sovereign chief of the islands of New Zealand. In 1837, Baron de Thierry arrived in the north of New Zealand and attempted again to claim sovereignty. Although he did not prosper well on the land he was allotted at Hokianga, he continued to send accounts of his success to France, until his claims were thwarted by the Treaty of Waitangi in 1840. After some years overseas he returned to New Zealand in 1853, and began an autobiography in which he depicted himself as the principle pioneer colonist of New Zealand. Given that de Thierry still made such claims late in his life, this coat of arms could date from as late as the 1850s. An 1825 date could be supported by the fact of the handwritten address in Paris on the verso, 190 Rue St Honore.

Other Titles - Arms of the Baron de Thierry, Charles the first, king of New Zealand 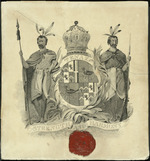