Starting the process to recreate a unique New Zealand story

Born in Wellington, New Zealand, production designer Felicity Abbott returned home from Los Angeles after she was invited to design the screen adaptation of the Man Booker prize-winning novel ‘The Luminaries’. Abbott sought out fellow New Zealander and international set decorator Daniel Birt, known for his beautifully detailed work on ‘The Mummy’, ‘The Dark Horse’ and ‘Emperor’.

What began as a year-long creative collaboration between Abbott and Birt involved the creation of 96, individual sets that were constructed and decorated in their entirety. It brought together the talents of some 170+ art department personnel, all passionate about recreating this unique New Zealand story. These included scenic artists, plasterers, carpenters, sculptors, props buyers, set dressers, prop makers, graphic designers, art directors, set designers, engineers, model-makers, greenspeople, landscapers, textile designers and floral artists.

Describe your approach with pre-production phase in researching the period and ensuring the production design and set decoration are key to telling the story?

Our starting point in developing the production design and set decoration for ‘The Luminaries’ was a lengthy period of research. During the initial exploration we gathered over 4,000 images that formed the basis of each set and character’s environment. We scoured online archives worldwide and in Aotearoa, New Zealand.

This culminated in a research trip to the Alexander Turnbull Library, National Library of New Zealand, Te Puna Mātauranga o Aotearoa, where we focused on collections containing images and documents depicting gold-rush communities around New Zealand in the 19th century. Furniture catalogues of the period and the Mundy albums, were a principal source of photographic reference. Our final selection included photography, painting, etchings, object ephemera and documents from the period.

Alongside historic imagery we also took inspiration from contemporary photography, art and nature to create a unique look, style and palette that could be described as ‘New Zealand Gothic’ in the tradition of Vincent Ward’s ‘Vigil’ and Jane Campion’s ‘The Piano’.

How did you use these sources in development of the production design?

Production design is the visual art and craft of cinematic storytelling. Our role is to create cohesive and transformative images for each character and environment. In collaboration with director Claire McCarthy and cinematographer Denson Baker, we selected 10 key images from the National Library collections, that formed the basis of our design concept and set build for the town of Hokitika.

The main inspiration for this set came from images of the west coast town of Lyell. We also referenced the towns of Reefton, Dillmanstown (Kumara), Greenstone, Greymouth and the north island gold-mining hub of Thames, alongside historical photographs of Hokitika. This allowed us to design the complex and contained geography that we created to provide maximum coverage for filming and to maintain the landscape as a constant backdrop. 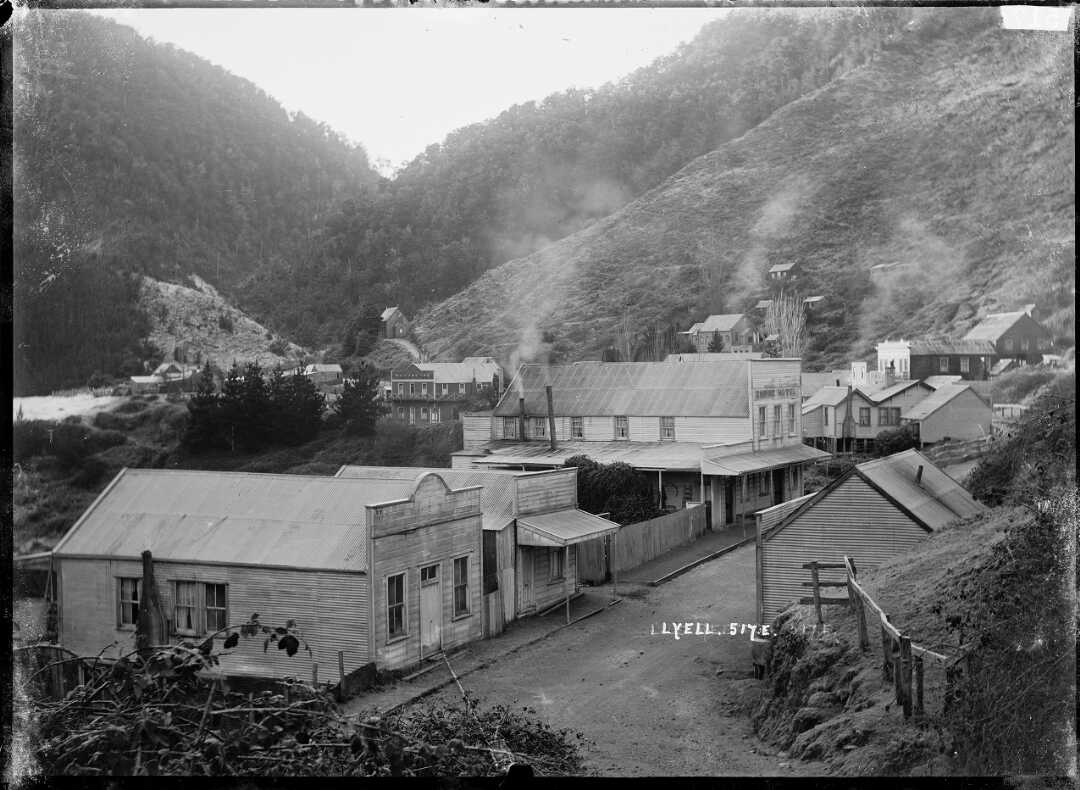 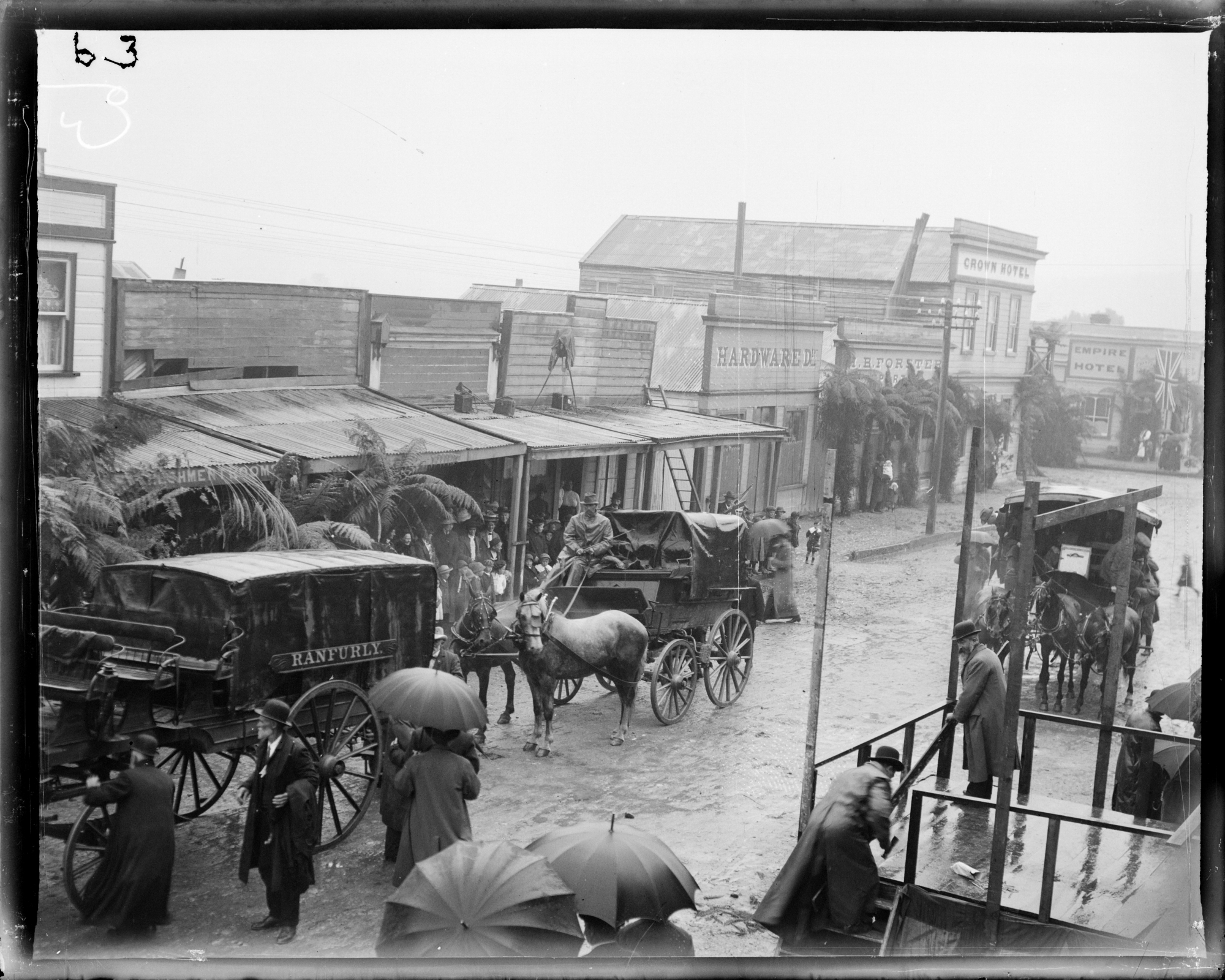 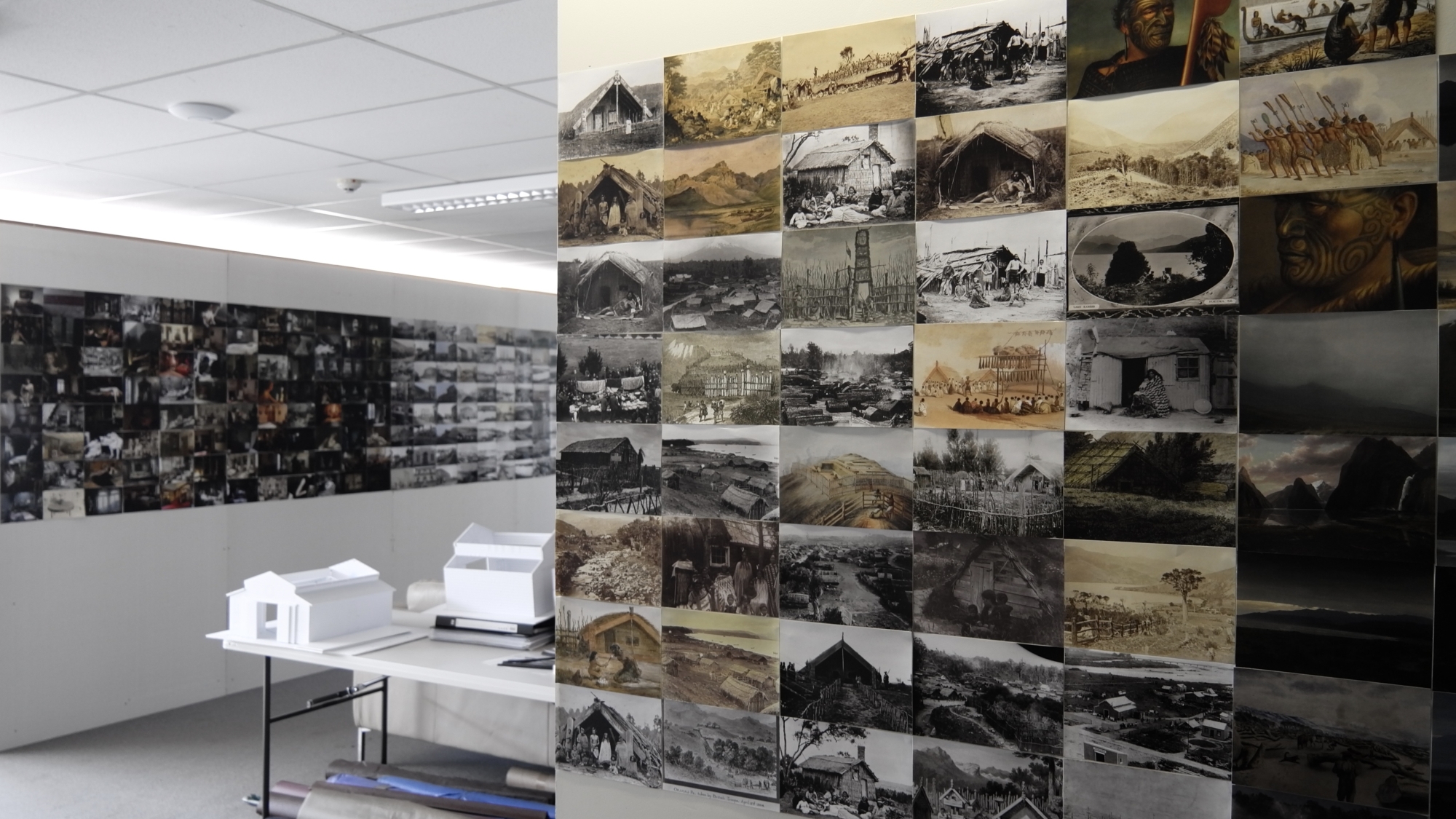 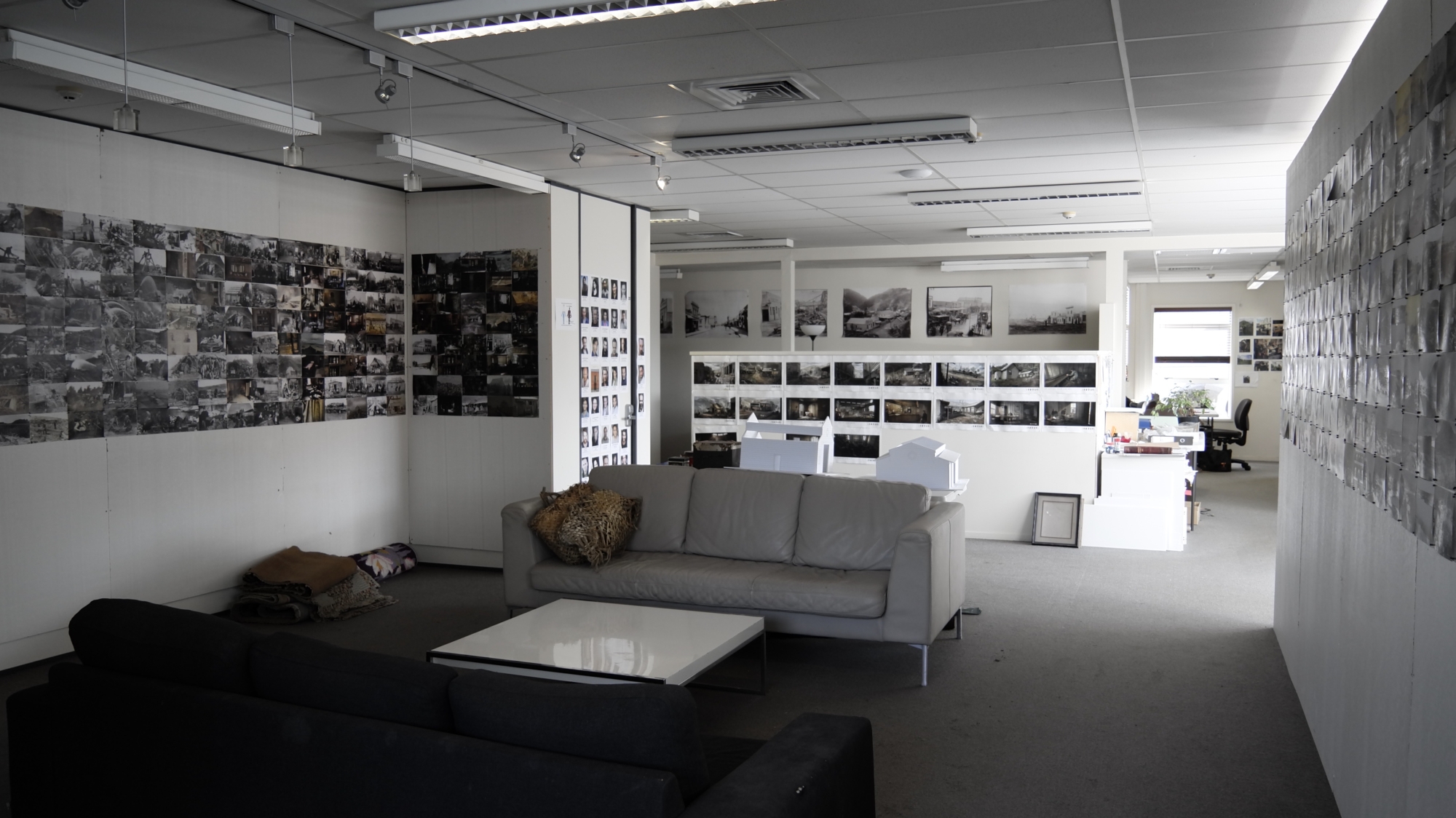 What did you focus on when you were building the Luminaries Hokitika set?

Sightlines — the camera’s focal length and the relationship from one point to another were crucial in designing our Hokitika set.

The final result is a culmination of the research and visual reference and our specific palette, tone and style.

Below are images of the set being built, models of the set, images we used for inspiration and the completed set. 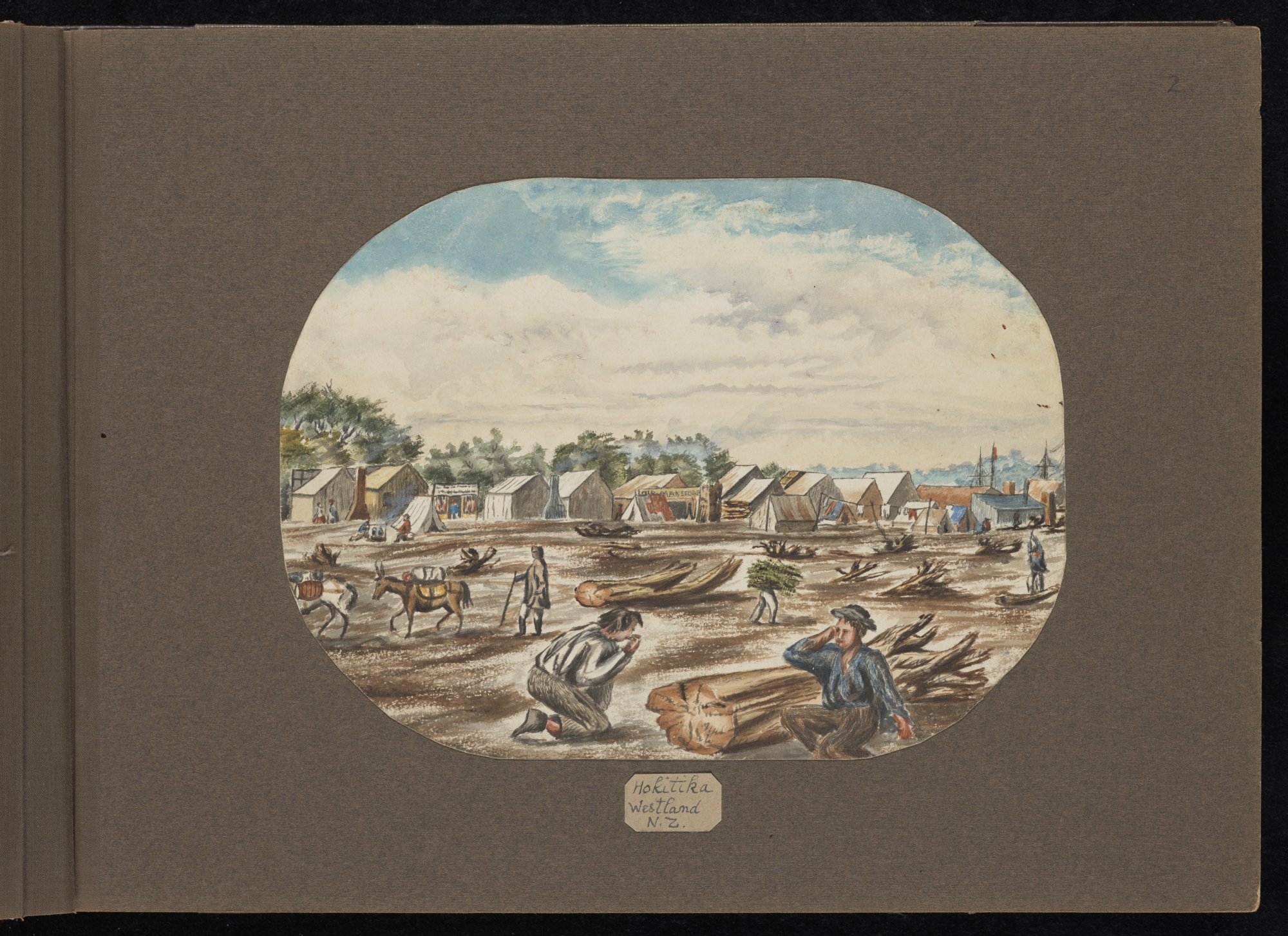 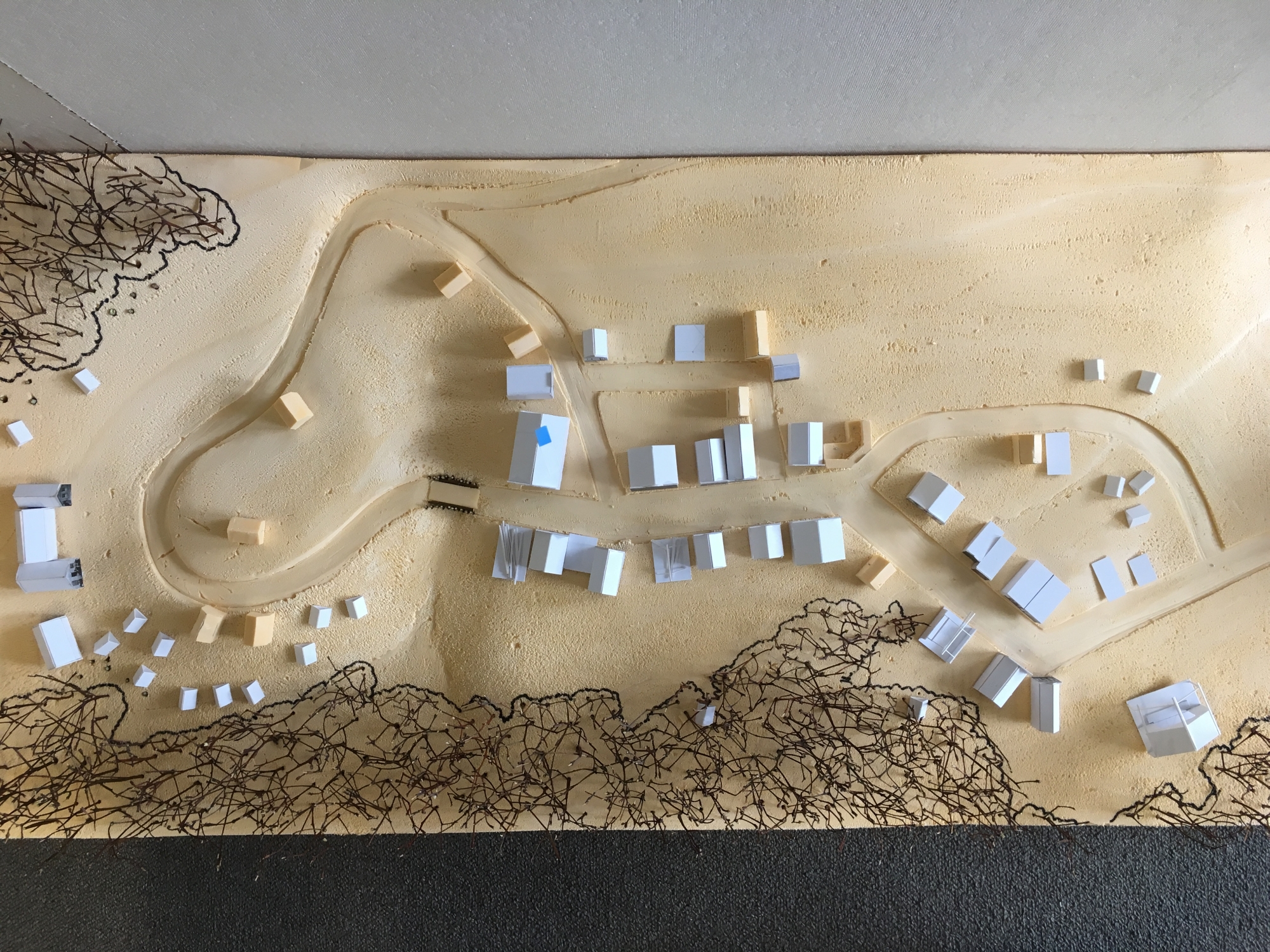 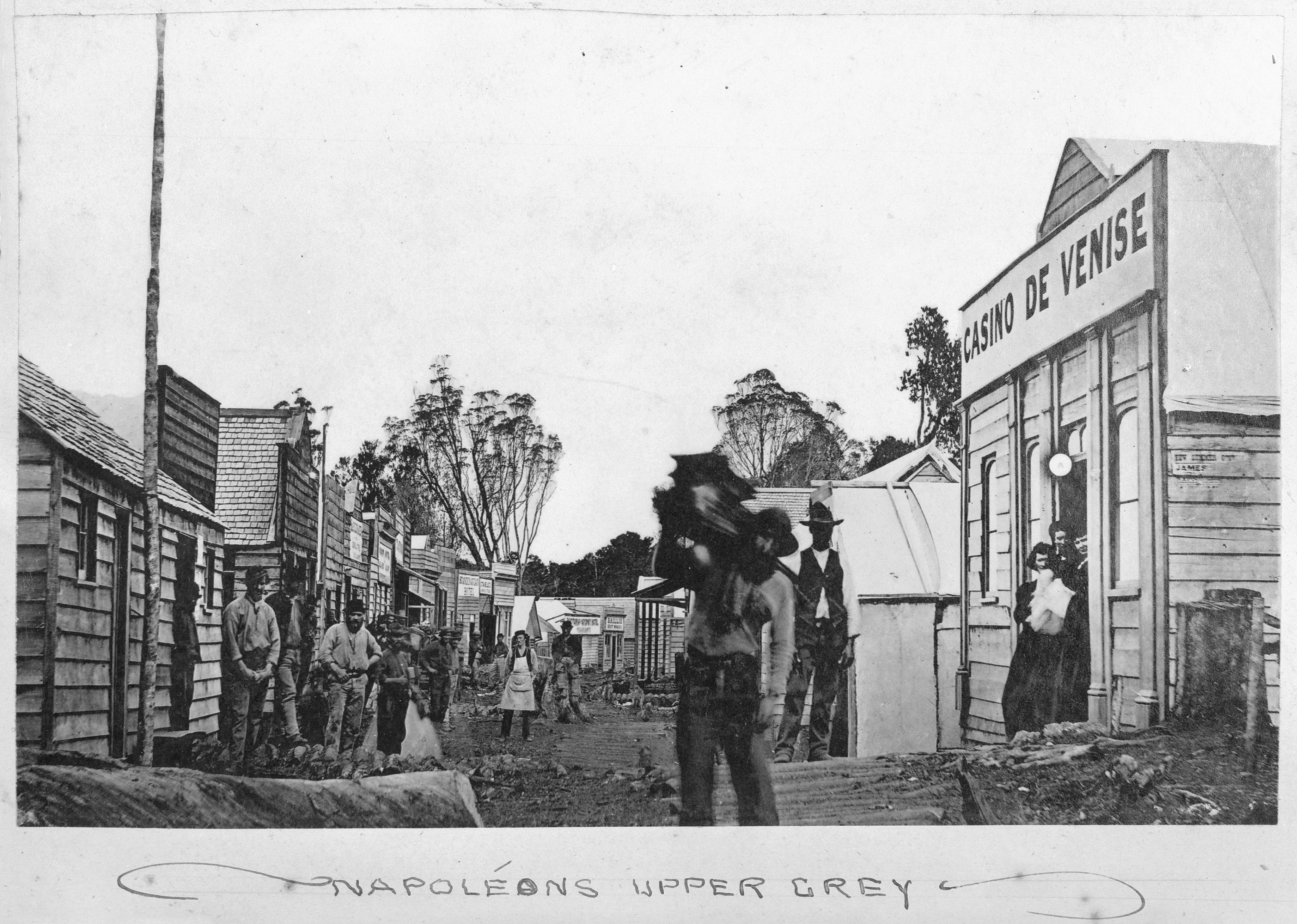 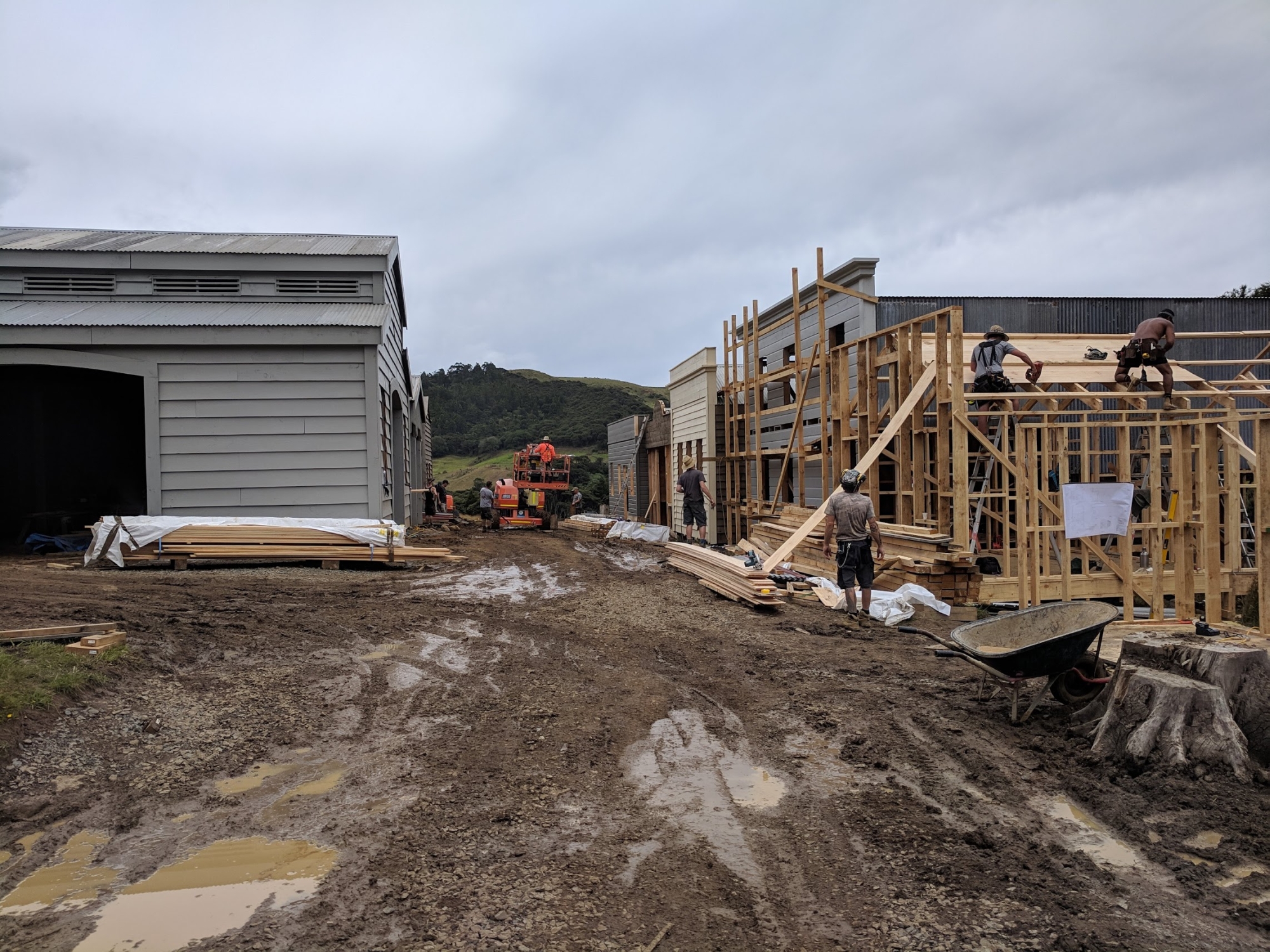 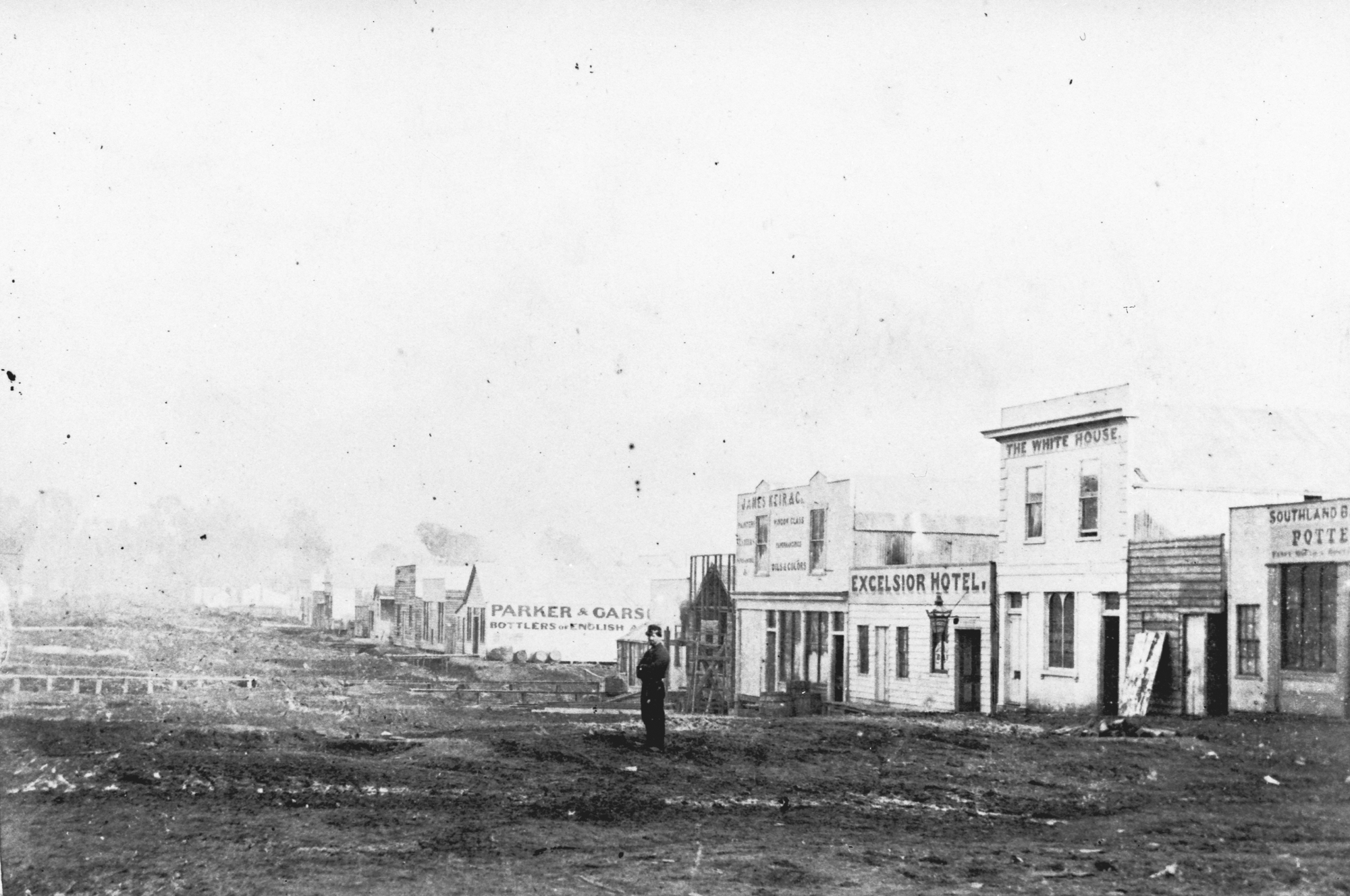 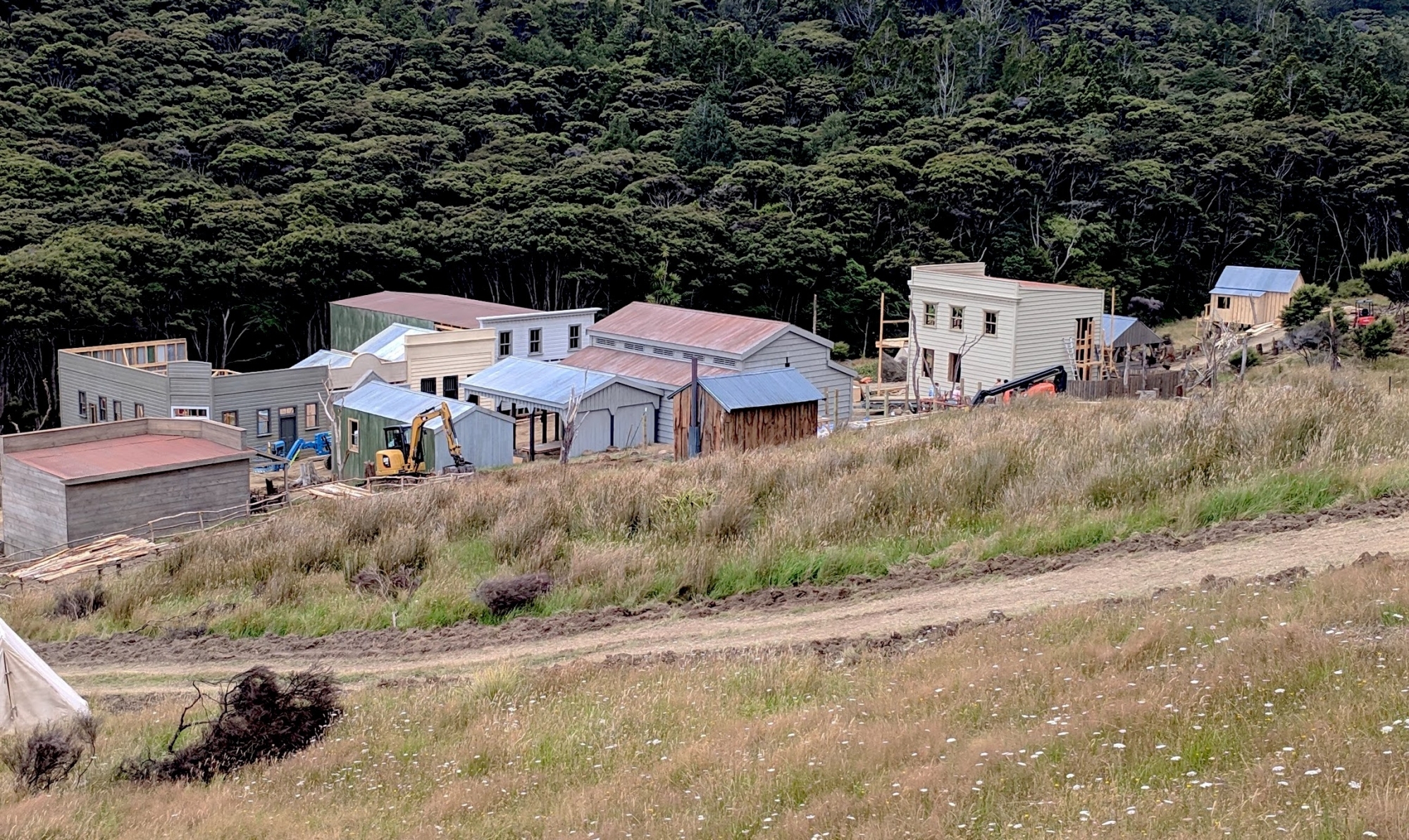 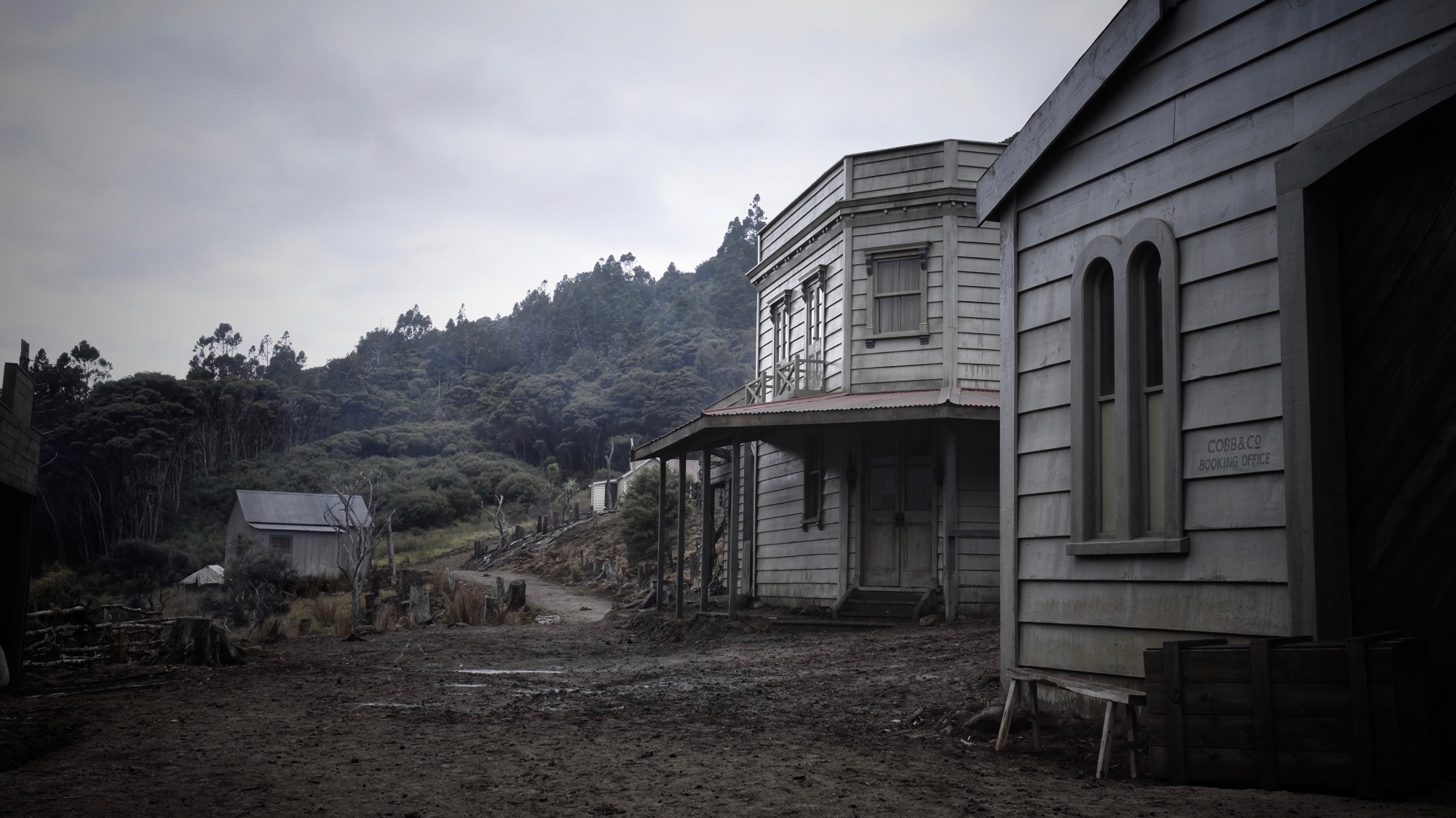 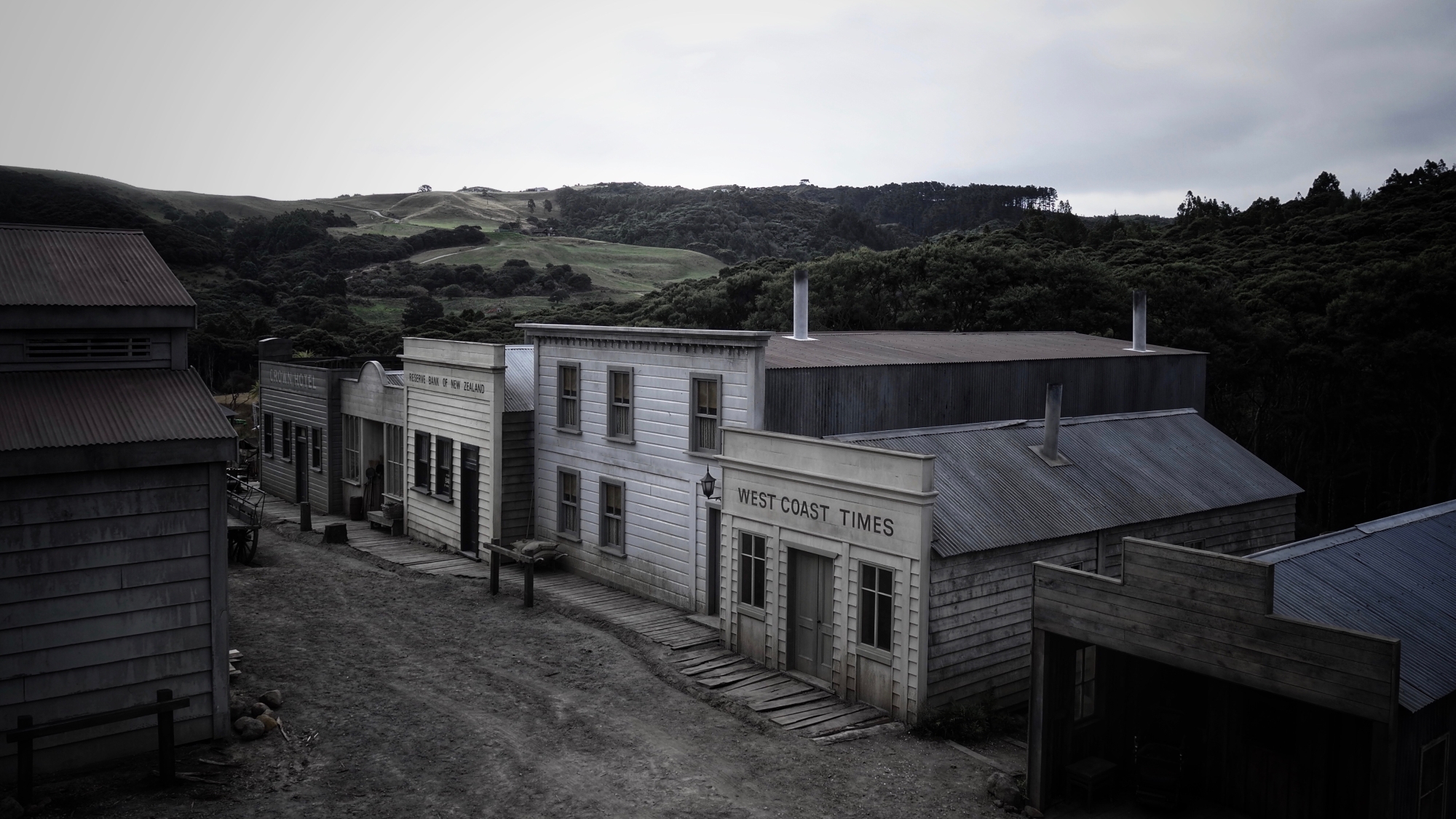 What was involved in the construction of sets and the acquisition of props and set dressing?

The Hokitika sets were built over a period of three months on a private farm in West Auckland. The landscape was created entirely from the ground up and involved the work of landscapers, carpenters and scenic painters for months before the final dress could take place. We had to clear land, lay roads, drainage and water tanks, just as you would an actual town. The result was a large ‘living set’ chosen for its ability to provide 360-degree coverage during filming.

Creating period drama in New Zealand posed unique challenges with the absence of prop and decoration houses similar to those that service the UK and US film industries. We carefully curated each environment by scouring auction houses, antique dealers and collectors both in New Zealand, Australia, the UK and US, for lighting, textiles and decoration. These elements were meticulously dressed into layered and detailed environments that become the living, breathing spaces for the character's performance to unfold. 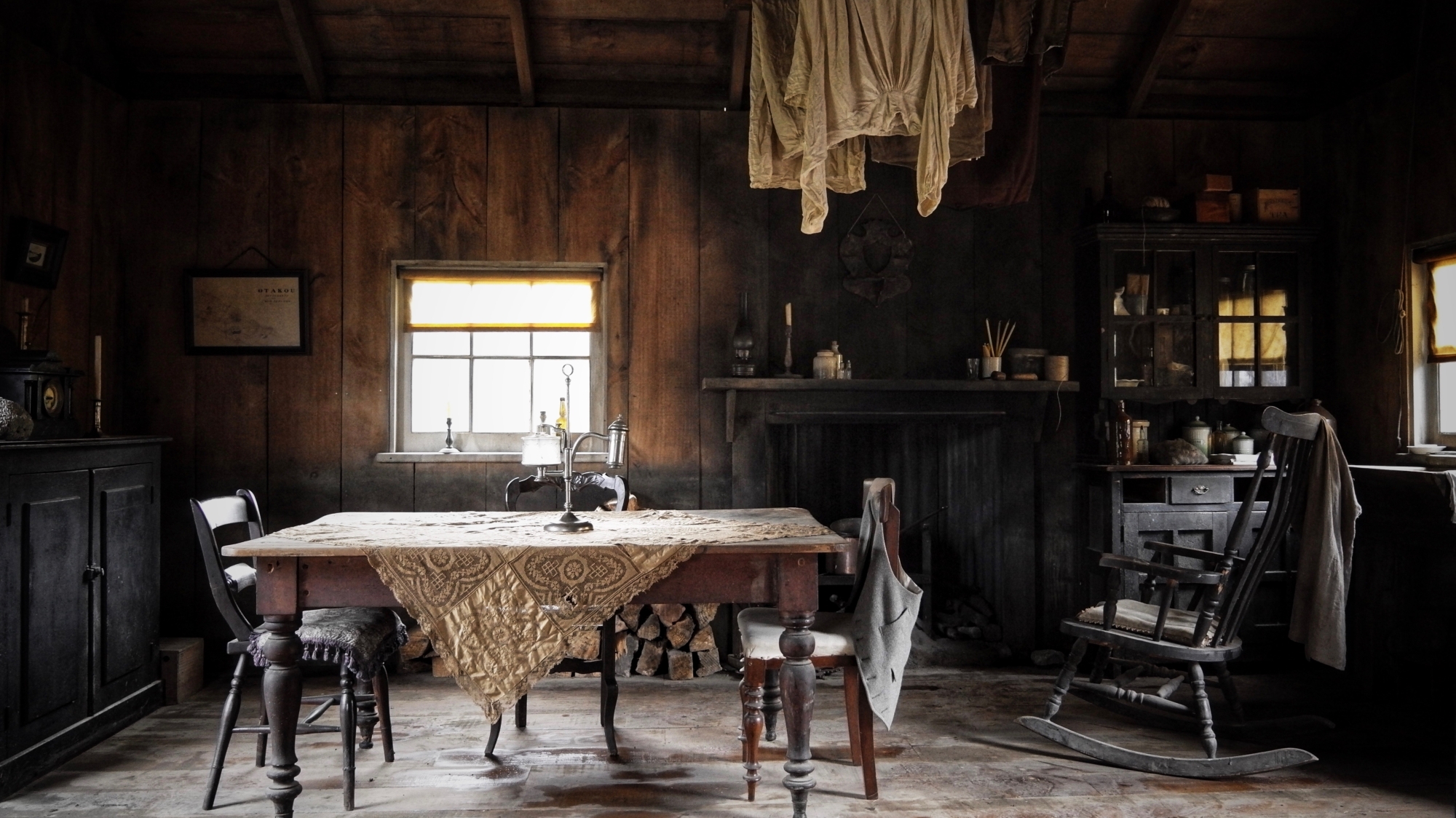 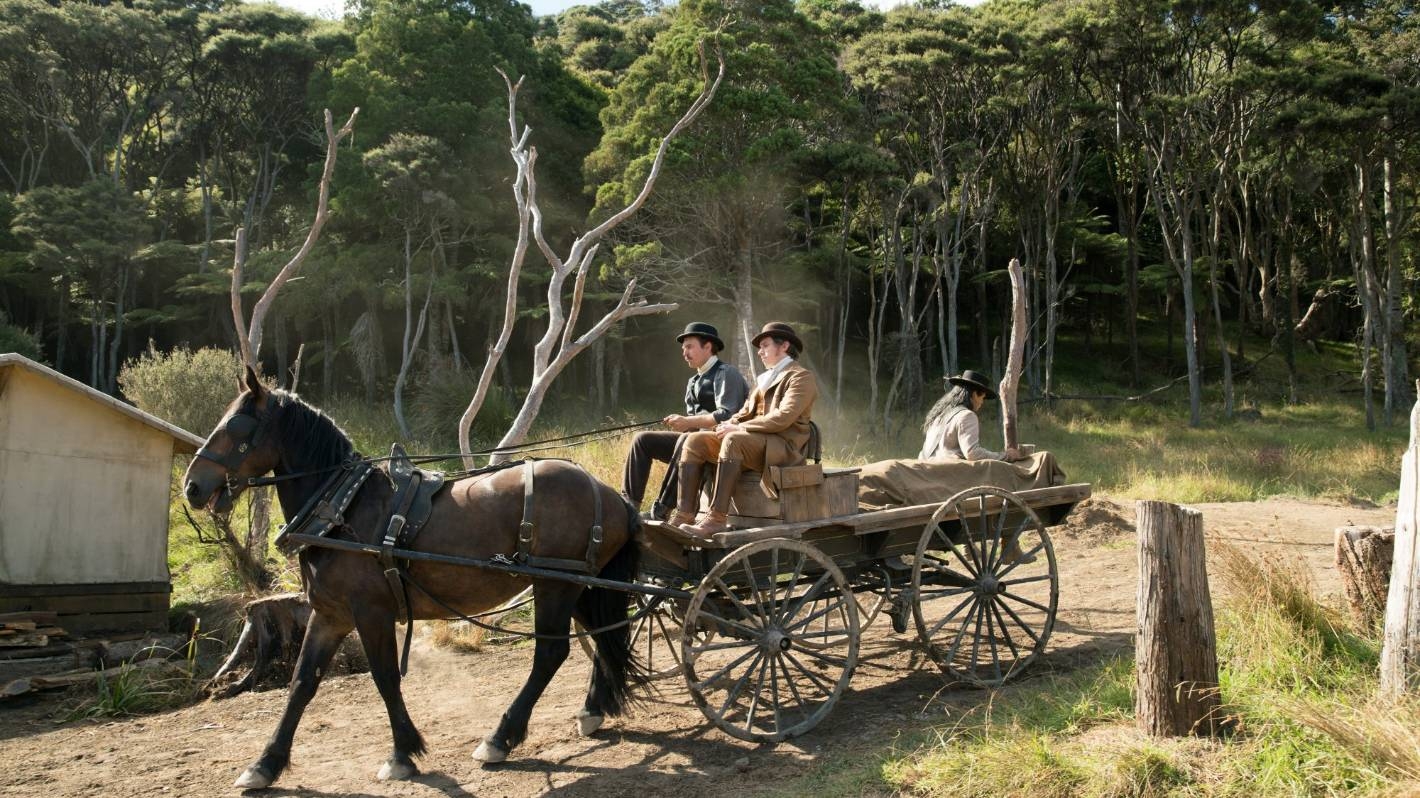 How do you balance period authenticity with the practicalities of filming and the requirements of the script?

Historical accuracy is important in terms of the architecture and period-specific details. We are making cinema however and not documentary and it is important to allow a departure from what may be ‘accurate’ when this is called for. The notion of ‘authenticity’ is foremost to us as filmmakers and that is always driven by the script.

Although this story takes place in the 1860s, we were committed to maintaining a sense of modernity in the visual style that underpins the visceral, heightened tone of the show. It began with the novel and Catton’s idea of a ‘living zodiac’ and it evolved from there. It was important to present Hokitika in a way that felt authentic to the west coast and the climate; at times treacherous, damp and muddy. Catton’s novel has been celebrated worldwide but as New Zealanders we have an innate understanding of the cultural sensibility and particular quality of the light, flora and fauna. These elements were interwoven into each of the intricately detailed sets.

Due to the lack of period-correct locations, carriages, boats, props, graphics and dressing available in New Zealand, we had to build the majority of the settings, including part of the tall ship the GODSPEED. The exterior ship was built as part of the Dunedin Quay set and the interior cabins and cargo hold were built on a gimble set in a warehouse in South Auckland. 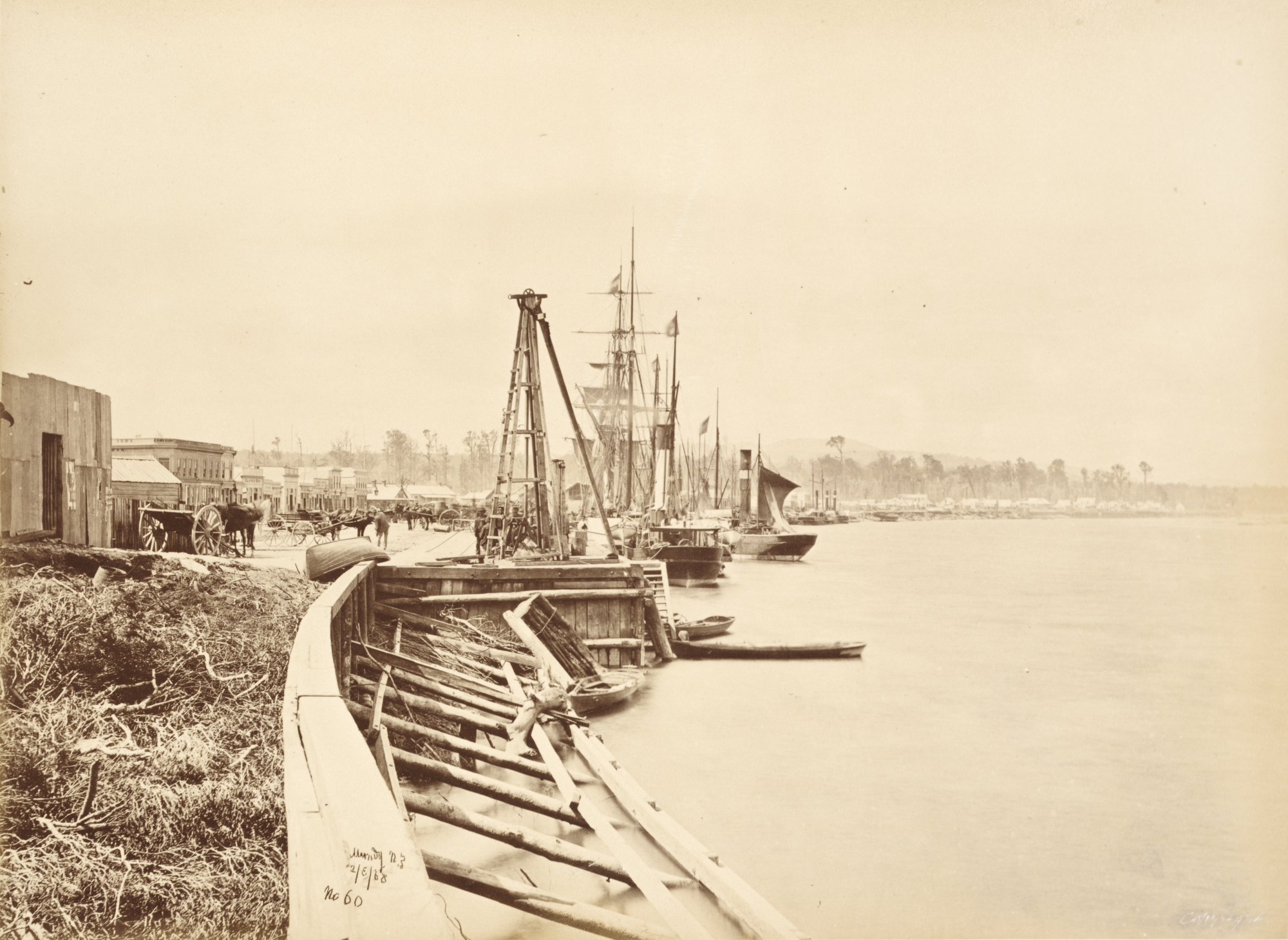 What do you enjoy about moving from the development and pre-production phase to principal photography?

This was an exceptionally challenging project to realise given the period, scale and detail that the story demanded. We relish the research and development phase as this knowledge informs every subsequent design decision.

What distinguishes the production design in ‘The Luminaries’ from a similar production filmed in the UK or US is that each of these environments was created from scratch rather than filmed in existing locations. In this sense the ‘world’ relies heavily on the practical, technical and aesthetic craft of the design elements. 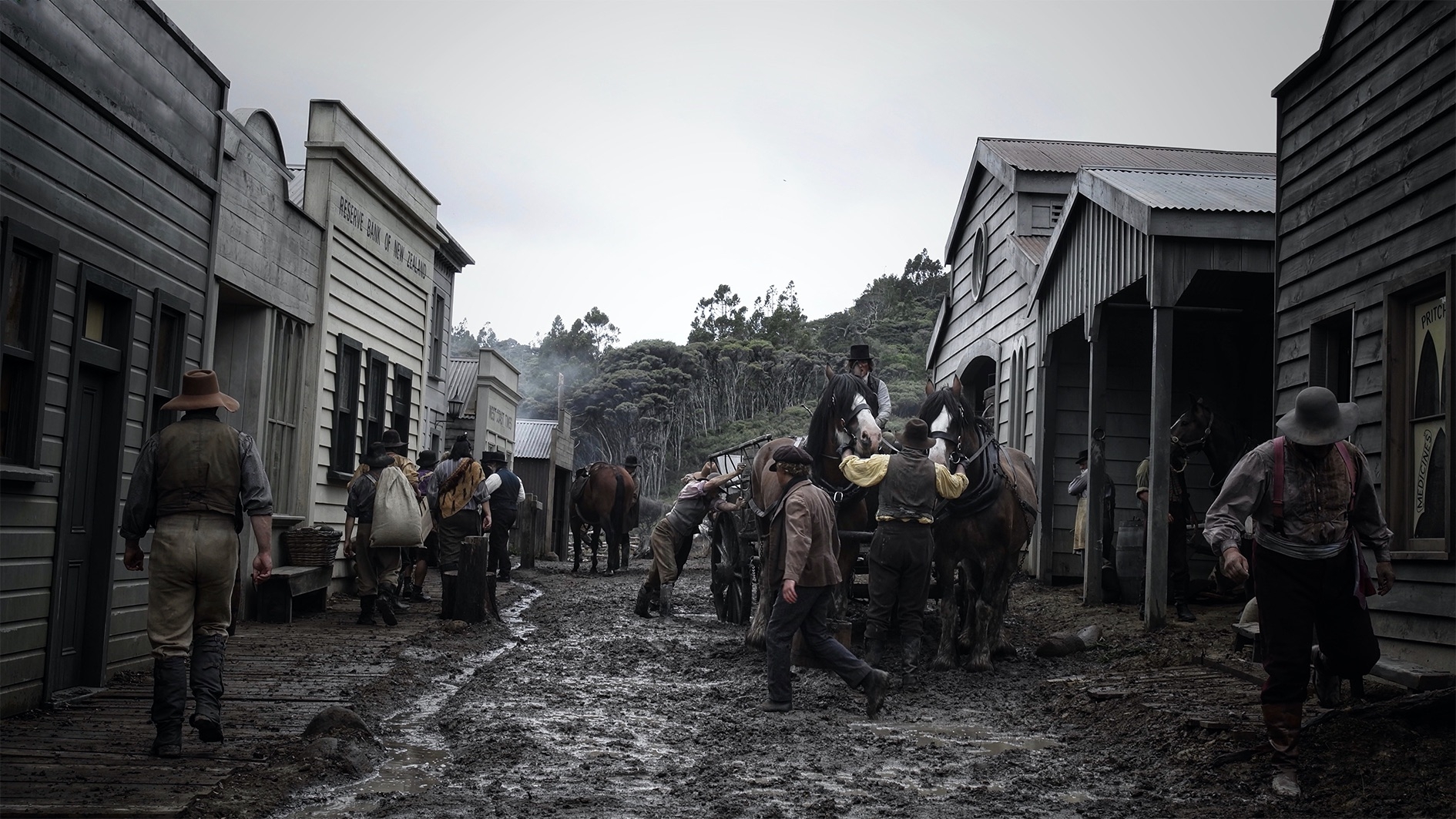 A great deal of our work is in the preparation and pre-production stages as the majority of the world is in various stages of creation. There is a palpable sense of magic as the sets begin to come to life and are painstakingly painted and decorated.

We were fortunate to have time with the actor Eva Green, who played Lydia Wells, on her character’s set — The House of Many Wishes. She had detailed notes that we incorporated into the set decoration and props. This enriches the process for us and ensures that the actor feels that the set accurately reflects their character. 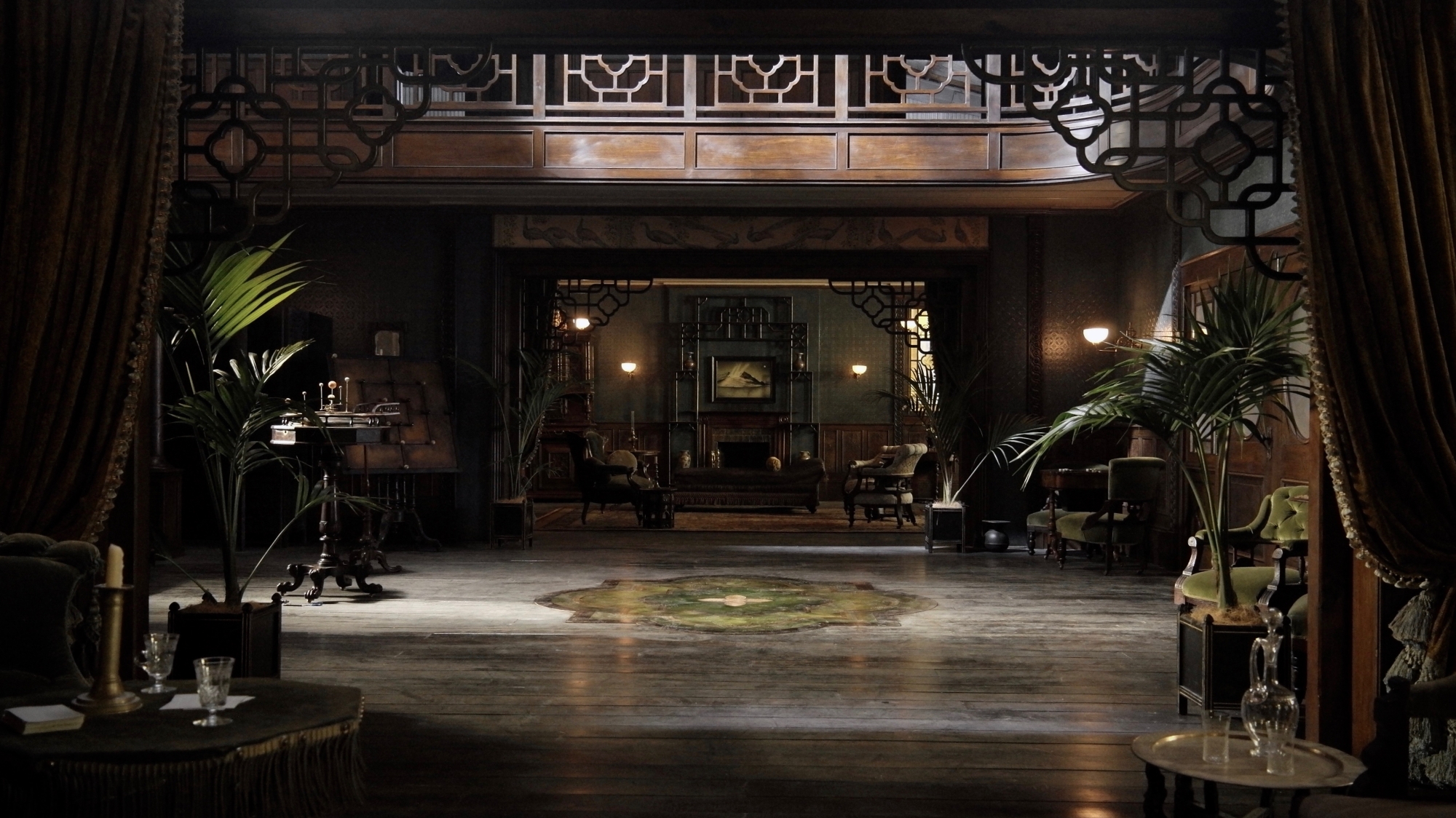 Thanks for your help Alexander Turnbull Library

We are passionate about the world that has been created for this New Zealand story and the result is unlike anything seen before on screen. It is a presentation of period that is uniquely antipodean and created in the tradition of a 'New Zealand gothic' that is rich and layered in its representation of the characters, landscape and architecture. It was a great privilege to be part of the creative team that brought ‘The Luminaries’ to life.

We would like to acknowledge the support of the Alexander Turnbull Library, National Library of New Zealand Te Puna Mātauranga o Aotearoa, in particular Photographic curator Natalie Marshall (currently on sabbatical until Dec 2020), Drawings, paintings and prints curator Oliver Stead and Imaging technician and photographer Mark Beatty, for their assistance in accessing these significant collections during our research for the production design of ‘The Luminaries’.

Watch ‘The Luminaries’ on TVNZ on demand

In the second part of this blog, Deidra Sullivan explores the landscape photography of Daniel Louis Mundy, a primary collection used in the production design of 'The Luminaries'.

Daniel Mundy — from Christchurch to Hokitika 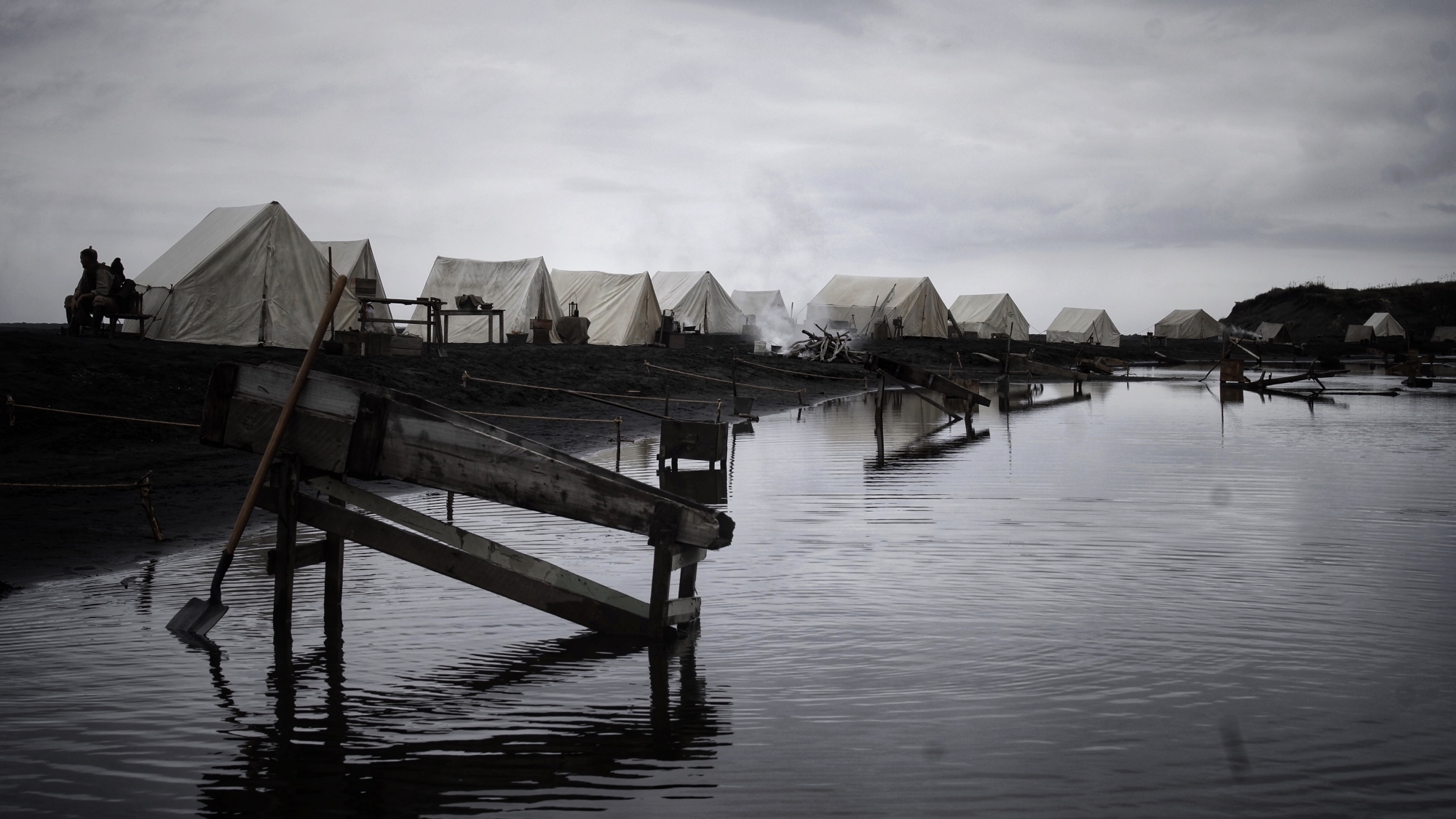 Nominated for Best Production Design by the Australian Academy of Cinema and Television Arts (AACTA) for Blumhouse sci-fi action thriller ‘Upgrade’, Felicity Abbott designed the BBC/Working Title UK production of ‘The Luminaries’. Daniel Birt is an internationally recognized set decorator working across film and television. He was invited to the production design branch of The Academy of Motion Picture Arts and Sciences in 2019.