August 26th, 2020 By Lissa Mitchell
The struggles and joys of colonial exploration in Fiordland through a pair of stereoscopes. Both are from the Burton Brothers studio, one from the Alexander Turnbull Library and one from Te Papa. Te Papa’s photography curator Lissa Mitchell investigates.

Twenty years ago, I was an art history postgraduate student writing about the images made at Milford Sound by Alfred Burton (1834–1914) of Dunedin photography studio Burton Brothers.

Up to that point, my training had not prepared me for what to make of a set of two stereoscopic views of two men and a dog — the first claiming they were starving and the second that they were ‘full and plenty’. This pair of stereographs were not conventional colonial landscapes — empty of human presence and focused on the view — here was a representation of life being lived with hardship and humour. 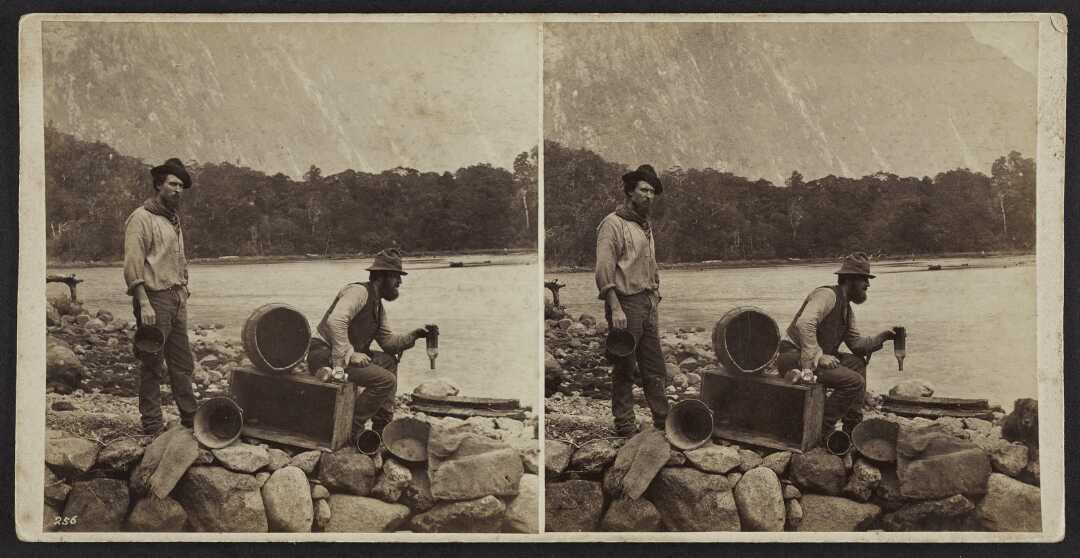 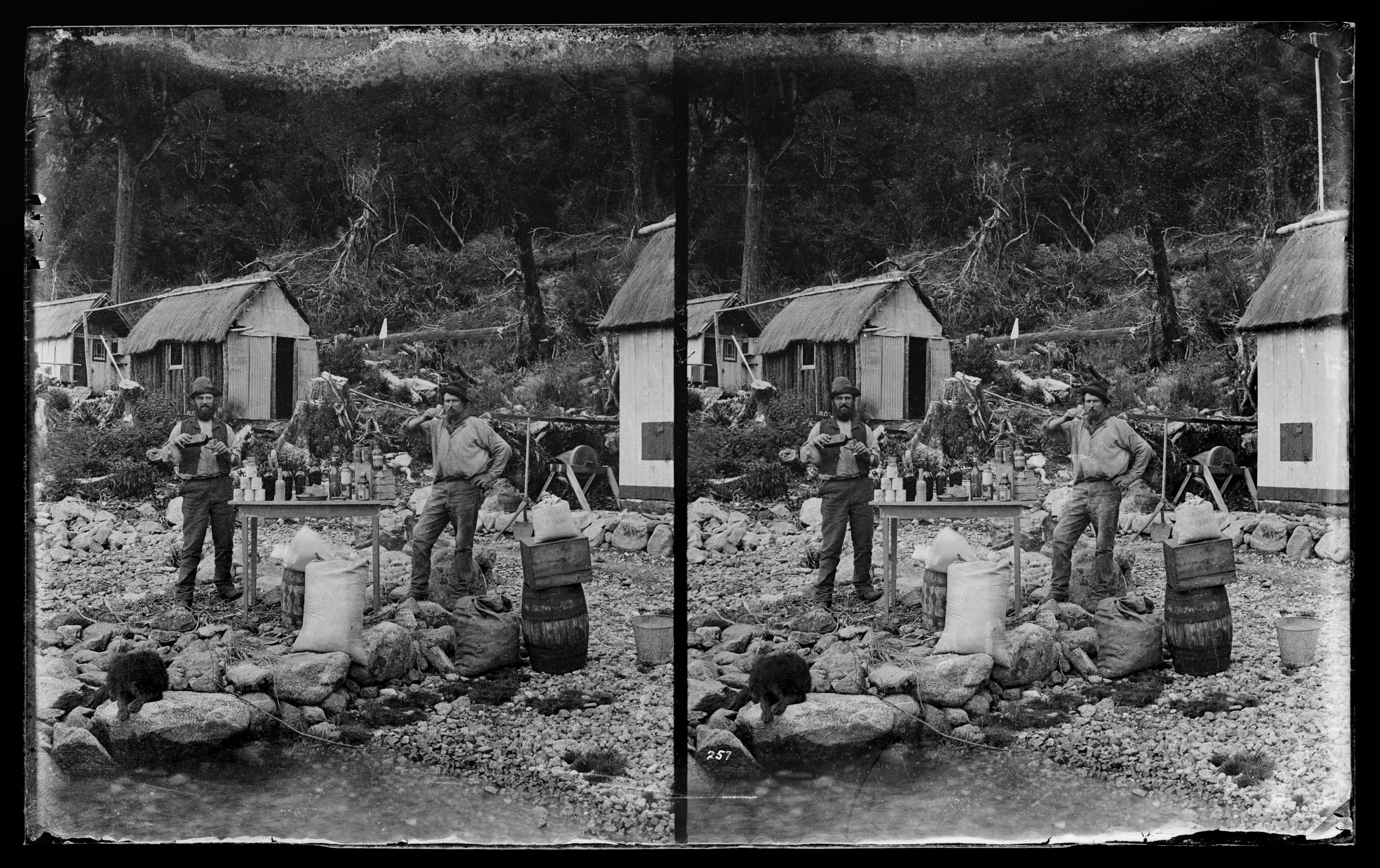 Better together — the museum and the library

Now I’m the Curator Historical Documentary Photography at Te Papa. One of the foundation collections of the museum’s photography collection is the negatives and prints of Burton Brothers (1867–98).

Te Papa holds the original negative of a stereoscopic image taken at Milford Sound in 1882: City & citizens – Full and plenty. Recently, the Alexander Turnbull Library, which is part of the National Library of New Zealand, acquired a collection that contained a vintage albumen print of the other image in the set: City & citizens – Starvation.

With no other surviving vintage versions of these two photographs, the two institutions now each hold a part of a unique story told by these objects. It is a great example of how both the museum and the library can work together to care for and share objects of our cultural heritage and enrich their stories, as these two images only make sense as a pair.

I visited the library to see the vintage print of Starvation and find out about the collection it is part of.

Man alone – some of the time

In 1877, Donald Sutherland (1843–1919) sailed with his dog, Joe, from Dunedin around the southern Fiordland coast to Milford Sound in a small open-air sail boat. Sutherland settled at the head of Milford Sound and ironically named his settlement ‘the city’.

Despite these humble beginnings, by 1888, Sutherland had achieved national and international status as an explorer in the Milford Sound area. Sutherland’s exploration of Milford Sound quickly established a catalogue of attractions that enabled the area to be developed as a tourist destination – a legacy that endures today. In particular, he was proud of the Sutherland Falls, which he claimed were the highest in the world and hoped would become a profitable attraction.

But in the early 1882 it was a different story. Sutherland and friend John Mackay were working exploring the area to find an overland route to Milford Sound as an alternative to getting there by sea. 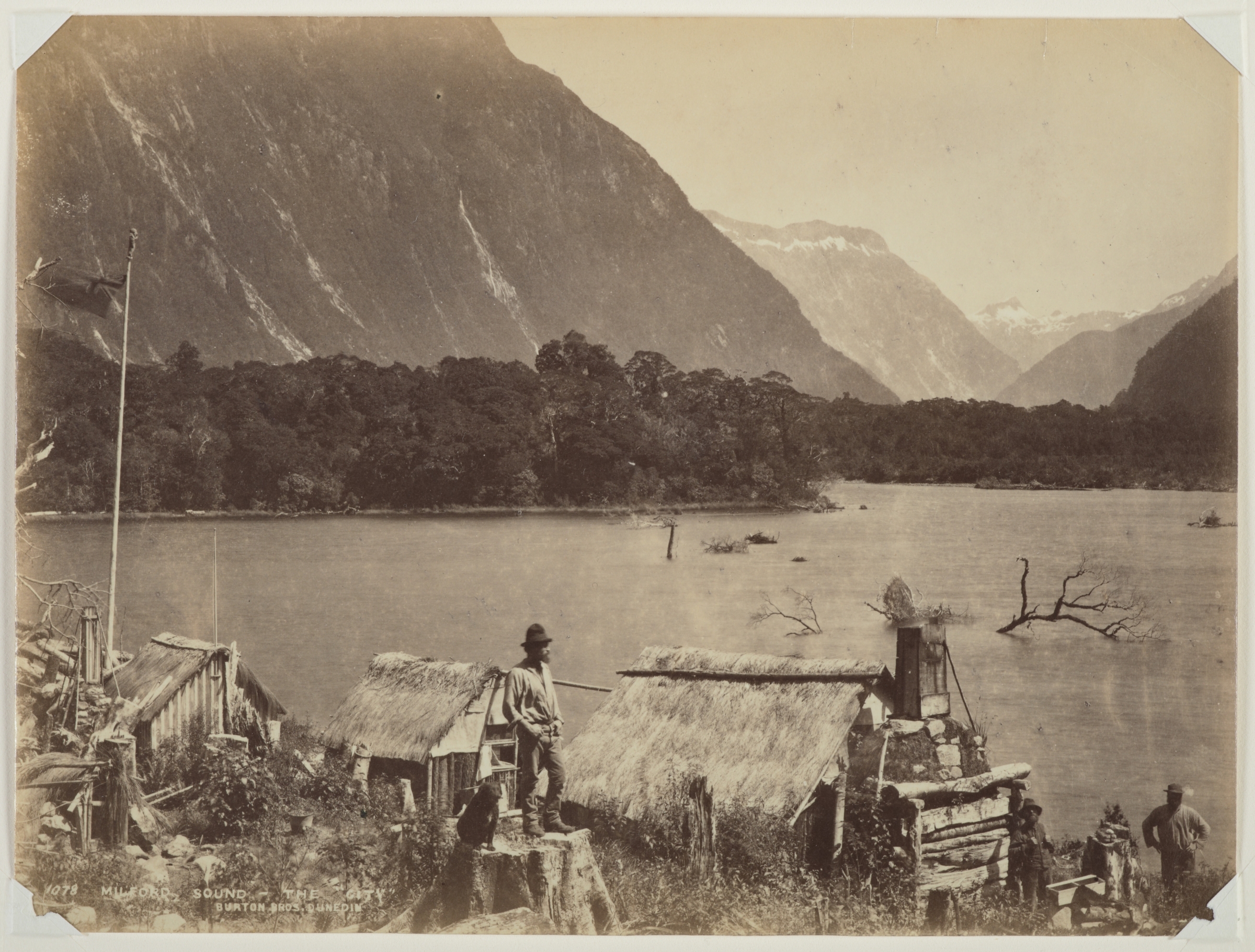 Donald Sutherland and his dog Johnny Groat at 'John O'Groats Hotel'. The buildings shown were named by Sutherland 'Esperance Chalet No. 1 Kennedy Street', 'No. 1 Rotorua Street', and the 'Store'. Milford he named 'The City'. Photographed in 1882 by Alfred Burton. Purchased 1987 with New Zealand Lottery Board funds. (O.001697). Te Papa.

Shopping in the wilderness

Over the years, Sutherland wrote many letters to newspapers and officials complaining about the lack of assistance from the government in conveying supplies to Milford Sound. He claimed that he was working for the good of the country and that assistance through the regular delivery of supplies would be a small but valuable recognition of the work.

However, this had no effect, and Sutherland continued to send letters and receive supplies by intercepting random steamers when they called in for brief sightseeing at Milford Sound on their way to and from Australian ports. This was a slow way to receive supplies of food and other goods, especially if the letter went via Australia before getting back to Bluff or Dunedin.

You bring the food, and I’ll supply the scenery

During the 1880s, a handful of artists and photographers went to stay with Sutherland at ‘the city’ and used their time to make sketches for paintings or take photographs. Burton was one of Sutherland’s most frequent visitors. He made several trips to Milford Sound in the 1880s, staying for four to six weeks each time.

On 4 February 1882, Burton was dropped off at the Sound by the SS Rotomahana, on its way from Dunedin to Melbourne. (He caused the steamer to make an unscheduled stop.) Part of Burton’s luggage included supplies to enable his own comfort during his stay at the Sound and to replenish Sutherland’s larder.

From misery to joy

I imagine the fun they had recreating the two scenes after Burton had arrived — a novel way of spending their time in this isolated place. Burton’s experience and love of Shakespearean theatre was probably helpful in planning images where Sutherland and MacKay re-enact and dramatise the lack of basic food and supplies living in isolation.

Starvation shows a re-enactment of the men’s situation prior to Alfred Burton’s own arrival at the Sound. Sutherland and Mackay display an arrangement of empty buckets, a barrel, and a box. Mackay sits morosely holding an upturned bottle, while Sutherland stands looking at the camera and holding an empty billy — the message is there is nothing to drink or cook. Burton took the photograph with the Sound in the background — acknowledging the men’s desperate situation while they wait for a ship to come.

Full and plenty is the happy ending, showing the situation after the arrival of Burton. Supplies have been replenished — all the containers are upright again, sacks of dry goods sit near a table loaded presumably with full bottles, cans, boxes, and packets. Sutherland and Mackay, looking in the photographer’s direction, toast Burton while Joe, the dog, sits at bottom of the scene. Comfort has arrived and the little community is happy and self-sufficient again. The background of the image has turned back to the huts of the settlement with an enormous tree stump in the centre behind the men.

My postgraduate research had argued that through photography, Burton and Sutherland had developed and extended a relationship that aided Sutherland’s survival and the development of tourism in Fiordland – these two images demonstrate the practicalities of this.

Looking at these two images again, I’m curious about what Sutherland ate, what supplies he ordered, and what Burton would have brought with him. Obviously, there was plenty of wildlife, and Sutherland was known to have plant specimens and bird skins prepared ready to sell to travellers on the steamers. I’m guessing flour and alcohol formed a portion of Sutherland’s diet.

So, reader, what do you think Sutherland ate and ordered? Do you recognise any of the items in the Full and plenty image? I’m guessing that the writing on the tin on the table (I can read ‘Black P’ before it is cut off) is a tin of plums, and it looks like there are some crackers too.

If you can identify any other objects in the image please share your observations in the comments. 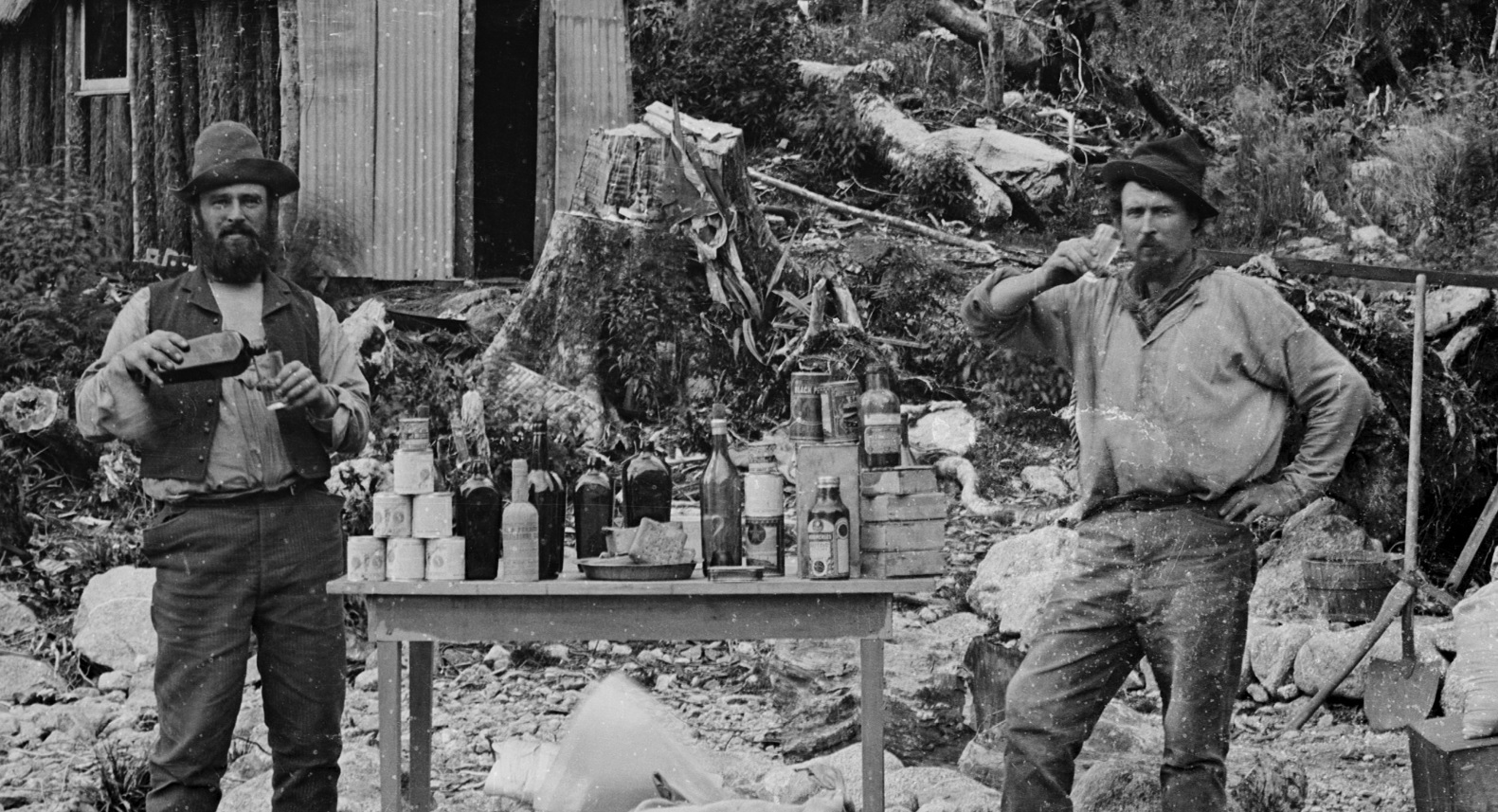